OLD BACHELOR, THE. AKA - "Old Batchelor (The)." English, Jig. G Minor. Standard tuning (fiddle). AAB. Music and dance instructions ("Longways for as many as will") for "The Old Bachelor" first appears in Henry Playford's Dancing Master, 9th edition [1] (London, 1695, p. 165), and in subsequent editions through the end of the series in 1728. It also appears in Walsh's Compleat Country Dancing Master (London, 1718, and again in later editions of the work in 1731 and 1754). It is the vehicle for a song in Thomas D'Urfey's Wit and Mirth, or Pills to Purge Melancholy, vol 6 (London, 1719-1720) and the French Airs de Danses Angloises Hollandoises et Francoises a Deux Parties by Antoine Pointel, published by Christophe Ballard in Paris in 1700. It was included in the music manuscript copybook of Joseph Maria Garcia of Chalco, Mexico, dating from 1772, containing some 300 melodies and numerous country dance instructions. 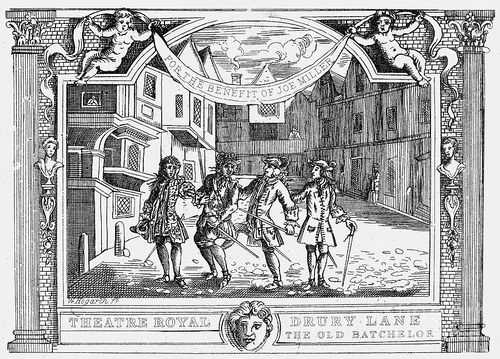 A 1738 theater ticket for Congreave's "The Old Bachelor," by William Hogarth. The performance was a benefit for English actor Joe Miller (1684-1738).

"The Old Bachelor" (1693) was a comedy by twenty-three year old William Congreave (1670-1729), a sexual comedy of manners and his first play. Music for the production was by composer Henry Purcell (1659-1695). The play was a hit, running an unprecedented fourteen days in London. This jig is Purcell's work, who, according to Graham Christian (2015) composed it first as a jig in Act I of The Fairly Queen (1692), an adaptation of Shakespeare's Midsummer Night's Dream. "Purcell reused the tune," writes Christian, "for the 1693 production of William Congreve's first play, The Old Bachelor (1693) as a setting for an added song following 'Thus to a ripe, consenting maid' in Acit II." Words to that particular song, however, have not survived.

Come come, leave Business to Idlers, and
Wisdom
to Fools; they have need of 'em: Wit, be my
Faculty; and
Pleasure, my Occupation.