Find traditional instrumental music
This is the stable version, checked on 29 February 2020.
Jump to: navigation, search

OLD BUZZARD [1]. American, Reel. USA, central Kentucky. G Major. Standard tuning (fiddle). AABB'C. The tune was recorded by Kentucky fiddler Doc Roberts (1897-1978) in 1927 in Richmond, Indiana, backed by African-American guitarist John Booker. Roberts learned it from Owen Walker, an older African-American fiddler from Madison County, Ky., a friend and neighbor who was born in 1857. According to Charles Wolfe (Kentucky Country, 1982, p. 29), Walker was "a well-known entertainer in the World War I era and was much in demand for social events in the region; he never recorded but he passed on much of his repertoire and style to the Roberts brothers, including such tunes as "Old Buzzard," "Brickyard Joe (1)," and "All I've Got's Done Gone (1)," all of which Doc later recorded....Years later Doc acknowledged his debt to Walker: "He helped me in every way in the world," he said." Gus Meade thinks 70% of Roberts' repertoire was from Wallace (Wolfe, 1982). The melody bears no relation to the better-known tune with the similar title, "Shoot that Turkey Buzzard," however, several have pointed out the similarities with the Ozarks regional tune "Fort Smith (1). Researcher Guthrie Meade (Country Music Sources, 2002) believes "Old Buzzard" linked to "Big Eyed Rabbit." 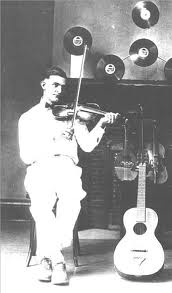