OLD JOE (3). American, Air (2/4 time). G Major. Standard tuning (fiddle). One part. "Old Joe" is a comic black-face minstrel love song first published in New York in 1844, set to a simple melody that is little but a syncopated version that of the children's song "Twinkle Little Star." The lyrics to the Ethiopian Serenader's version [1], published in 1848 and attributed to T. Halliday, go: 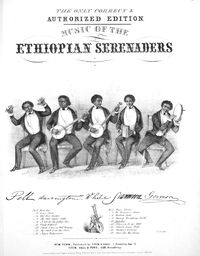 A man down south I once did know;
His head it was as white as snow;
He went down to de Ball one night,
De fust Gal he saw, she was clear out ob sight.

To a man at de door he den did say,
O who's dat color'd Gal I pray;
Ob de Balldis night she is de Wenus,
Dey call her Roas Clementenus.

Old Joe he walk wid her aside,
And said ole Gal will you be my bride;
She says, dear Joe I must confess,
I really lubs you much de best.

The song has also been attributed to Frank Bower of the Virginia Minstrels who penned it in 1844. However, the character of the old black man was an early staple of the minstrel genre; in 1845, Joel, Sam, and Dick Sweeney formed the minstrel troupe "Old Joe's Minstrels" (Joel Sweeney [2] is popularly credited, albeit probably erroneously, with adding the 5th string to the banjo). The author of the banjo tutor listed below, Gumbo Chaff, was a pen-name of Boston publisher Elias Howe. The melody to "Old Joe" was entered in to the mid-19th century music manuscript collection of Bellport, Long Island, ship's captain and fiddler Isaac Homan, along with other blackface minstrel favorites.


See also listing at:
See/hear the tune played on gourd banjo on youtube.com [3]