Find traditional instrumental music
This is the stable version, checked on 12 May 2020.
Jump to: navigation, search 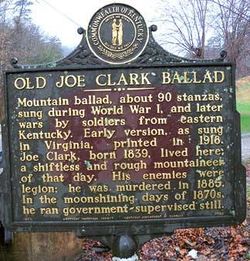 OLD JOE CLARK is the ubiquitous, quintessential old-time fiddle tune, possessing the same venerable status as a handful of others, albeit most often played as a 'learning piece' or introduction to the genre. Samuel Bayard (1981) thinks it was originally a song tune that later (or in parallel) became a fiddle standard and play-party tune. Alan Jabbour states he has not found any 19th century examples of the tune in printed collections, nor is it mentioned by name in any 19th century texts, and he believes it is no older than the late 19th century or the early 20th century. The earliest reference appears to be in the Journal of American Folklore, XXV, 152, where it is noted that "Old Joe Clark" was "sung by East Tennessee whites, 1905." Mike Seeger (1983) relates the local story of the origins of the tune where he lives in Rockbridge County, Va.:

Joe Clark's father settled around Irish Creek, near South River, in the early 1800's. Joe Clark had a daughter, and a jilted beau
is said to have written the song, out of jealousy, in the late 1800's. The Clarks have been family-style string musicians right down
through the years.

Another investigation determined the source of the tune to be the murder in Maryland of a traveling salesman named Herbert Brown by Joe Clark and Brown's wife Betsy sometime after the Civil War. Joe and Betsy attempted to cover up the crime by asserting that Brown was on a trip up North. This perhaps explains the verse:

Old Joe Clark killed a man
Layed him in the sand.

...and the chorus, many versions of which include "goodbye Betsy Brown."

Yet another, more substantial, claim is that the song is named for Joe Clark of Clay County, Kentucky, born in 1839. During the Civil War Clark enlisted in the Union Army and served for about six months before receiving a disability discharge in 1862, after which he farmed. Later he ran a general store and had a state-licensed moonshine still. Clark, however, was a womanizer, and this probably led to his murder in 1886, when he was shot and killed near the back porch of his store. There is a Kentucky State historical marker (#1382 - see picture above), in front of the U.S. Post Office at Sexton's Creek that reads:

Mountain ballad, about 90 stanzas sung during World War I and later wars by soldiers from eastern Kentucky. Early version as sung in Virginia, printed in 1918. Joe Clark born 1839, lived here; a shiftless and rough mountaineer of that day. His enemies were legion; he was murdered in 1885. In the moonshining days of the 1870s he ran a government supervised still.

The tune was recorded for the Library of Congress by musicologist/folklorist Vance Randolph from Ozark Mountain fiddlers in the early 1940's. Virginia family band "Fiddlin'" Cowan Powers and Family's recording of the piece was the third best-selling country music record of 1924, while the Skillet Lickers (north Georgia) 1926 recording was the fourth best-selling for that year. "Old Joe Clark" was recorded in 1934 by Louisiana fiddler Wayne Perry, a "lovely and unusual setting" says Kerry Blech. Blech notes that another Louisiana fiddler, Horace Foreman, recorded the tune around the same time. He states: "From his photo Perry looks to be in his late 20's or early 30's, while Foreman had been born in 1849, yet their versions are extraordinarily similar," pointing out the strength of regionalism in isolated areas with regard to traditional music. These and similar ditties were collected with the tune:

I has to ride the leadin' mule,
A switch in my right hand;
Gwine to ride with Old Joe Clark,
To a foreign land.

I don't like Old Joe Clark,
I'll tell you the reason why;
He caught his foot in a panel of my fence
And tore out all my rye. ... (Bayard)

Many old-time fiddlers (such as West Virginia's Edden Hammons) play the piece in cross-tuning, AEae, although some, like African-American fiddler Joe Thompson, play it in GDgd.