Find traditional instrumental music
This is the stable version, checked on 15 September 2020.
Jump to: navigation, search

OOKPIK WALTZ. AKA and see "Eskimo Waltz," "Utpick Waltz," "Ootpik Waltz." Canadian, American; Waltz. G Major ('A' part) & E Minor ('B' part) {Matthiesen, Phillips}: A Major ('A' part) & F # Minor ('B' part) {Reiner & Anick}. Standard tuning (fiddle). AA'B (Matthiesen): AABB' (Phillips): AA'BB' (Reiner & Anick). A folk-processed tune (whose title has various spellings) that surfaced as a contest waltz in the West (first heard at the Weiser constest in the early 1970's being played by a group of Spokane fiddlers--Don Gish, Sheila Wright, et al--who had learned it at fiddle contests in British Columbia, according to Seattle fiddler Vivian Williams). It quickly became widely disseminated and popular among many North American fiddling genres, though of late it seems to have lost its cachet among some fiddlers due to the frequency of its having been played and heard. Bluegrass fiddler James "Texas Shorty" Chancellor helped to popularize the tune in the United States, playing it as "Canadian Waltz." Rumors and folklore have become attached to it, and stories of its having been composed by 'Eskimos' or that it was a Canadian or Eskimo dirge are common; many sources have asserted (although seemingly with little confidence) that it derived from the Pacific Northwest. Some stories have it that the tune was named for an Inuit funeral dirge, and that the Inuit believed "ook pik" was the owl that came to carry to soul away.

The facts sustain at least some of the folklore, albeit in a rather quirky way. According to the Canadian Encyclopedia, the word Ookpik is Inuktitut for "snowy" or "Arctic owl." It was also the name of the most popular of Inuit handicrafts in the form of a souvenier sealskin owl, which featured an appealing large head and big eyes (a la the Disney cartoon characters). It was created at the Fort Chimo Eskimo Co-operative in Québec in 1963, and quickly became a worldwide symbol for Canadian handicrafts. The cute fuzzy, stuffed Ookpik owl doll was already a popular image in Canada by the time of the Centennial (1967), which propelled it to even more fame. 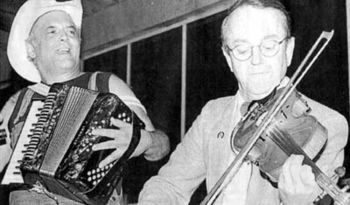 Despite the rumors of antiquity and Native American provenance, the "Ookpik Waltz" was not derived from indigenous sources but rather is a latter 20th century composition of Mission, British Columbia, fiddler Frankie Rodgers (1936-2009), who published it in a tune book of his compositions. British Columbia fiddlers know the tune book and the source well. It was also first recorded on his (c. 1960's) LP "Maple Sugar, Fiddle Favorites by Canada's Old Time Fiddle King Frankie Rodgers of the Rodgers Brothers Band" (Point P-250). Sheet music of "Ookpik Waltz" was published with a 1965 copyright to Rodgers. The melody has been "folk-processed" since then, but is still recognizably derived from the original.