Back to Paul's Steeple

PAUL'S STEEPLE. AKA and see: "I am the Duke of Norfolk/I am the Duke of York,” “St. Paul's Steeple." English, Country Dance Tune (cut time). G Dorian. Standard tuning (fiddle). AB. The air was published by John Playford (1623-1686) in the first edition of his English Dancing Master [1][2] (1651), and later in his Division Violist (1685). The dance and tune were retained in the long-running Dancing Master series through the 10th edition (1698), either as "Paul's Steeple" or "St. Paul's Steeple" (in later editions). Chappell (1859) reports the steeple of Old St. Paul's, London, was set on fire by lightning and burnt down in June, 1561, and that within seven days a ballad was entered on the subject at the Stationers' Company. The melody is part of a large tune family which includes the Scottish song "John Anderson My Jo," the Irish "Cruiskeen Lawn," the American "When Johnny Comes Marching Home Again," and the Welsh "Yn Nyffryn Clwyd" (Vale of Clyde (The)). In addition it is a relative of "Goddesses (1)" and "Quodling’s Delight," all of which, according to John M. Ward, can be considered descants over the ground known as passamezzo antico. As the vehicle for the song “Little Man and Little Maid (The)” the tune appears in The Edinburgh Musical Miscellany, printed in that city in 1793 by Grant and Moir. 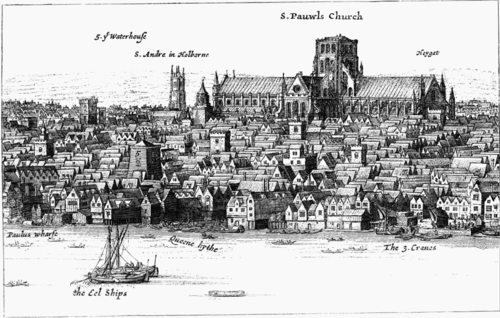 A 17th century view of St. Paul's Cathedral and surroundings.

The steeple of St. Paul’s was proverbial in its time for its height. In Vulgaria, printed by Wynkin de Worde in 1530, it is remarked: “Poules Steple is a mighty great thing, and so hye that unneth [hardly] a man may discerne the wether cocke, the tip is unneth perceived.” Lodge, in his Wounds of Civil War, makes a clown talk of the ‘Paul’s Steeple of honour’, meaning in the highest point that can be attained. There is a nursery rhyme on Paul's Cathederal:

Upon Paul's steeple stands a tree,
As full of apples as may be,
The little boys of London town,
They run with hooks to pull them down,
And then they go from hedge to hedge,
Until they come to London Bridge.

As "The Duke of Norfolk" a custom-song survived in parts of Suffolk till at least the middle of the nineteenth century a harvest suppers. One of the company, as the Duke of Norfolk, crowned with a cushion, received the homage of the rest, being presented with a jug of ale by a kneeling servitor; and he must drink off the ale without spilling it or letting the cushion fall. The editor of the Suffolk Garland (1818) refers the mock ceremony to the homage formerly paid to the Lords of Norfolk, the possessors of immense domains in the country. The song belonging to the ceremony was in dialogue form:

See also listing at :
See a standard notation transcription of the tune from Division Violin [3]
Hear a setting for recorder of the Division Violin version on youtube.com [4]
Hear/see an ancient instrument ensemble's performance of the Dancing Master tune [5]

Back to Paul's Steeple