Back to Perthshire Volunteers 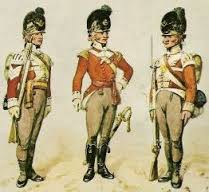 The Perthshire Volunteers were the 90th Light Infantry Regiment, who later became the second battalion of the Cameronians (Scottish Rifles). The regiment was raised in 1794 by Mr. Thomas Graham, Laird of Balgowan, afterwards Lord Lynedoch, on his return from the siege Toulon where he had gone as a volunteer. The King gave permission only reluctantly to Graham, who despite his volunteering had very little military experience, but Graham received advice and assistance from Lord Moira, who had much military experience in the American wars. The uniform consisted of the regular red coat, faced with buff, although the men wore light grey cloth pantaloons, leading to the corps being dubbed the “Perthshire Grey-Breeks.” The regiment served with distinction in Egypt at the beginning of the 19th century, then in Ireland and the East Indies during most of the Napoleonic period.

Additional notes
Source for notated version : - “As played by Alex. F. Skinner,” who was fiddler-composer J. Scott Skinner's older brother, and a powerful violinist in his own right [Skinner].

Back to Perthshire Volunteers