PHIL THE FLUT(H)ER'S BALL. Irish, Reel and Air. D Major. Standard tuning (fiddle). AA'B, AA'B'. Words and music of this tune were composed by the once well-known popular-song writer Percy French [1] (1854–1920), who began songwriting when studying Engineering at Trinity College, Dublin. "Phil the Fluter's Ball" was written in his post-college years when he worked as a engineer in County Cavan, before he became a full-time songwriter and entertainer. The song and tune (which bears a great resemblance to that of Kitty Got a Clinking Coming from the Races (2)) became popular through French's performances in the 1880's and quickly entered British Isles folk tradition. Phil the Fluther was a real-life character who rented a small flat in Leitrim. When times were hard and he was pressed for rent he would hold a pay-at-the-door rent party to raise the needed sum; these parties became legendary and inspired the tune. The first verse and chorus go: 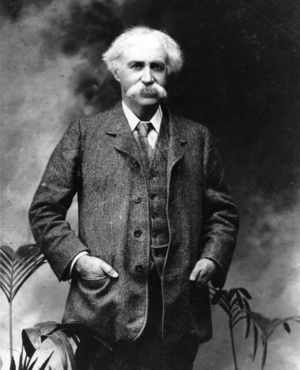 Have you heard of Phil the Fluther, of the town of Ballymuck?
The times were going hard with him, in fact the man was broke.
So he just sent an invitation to his neighbours, one an all
As to how he'd like their company that evening at a ball.
And when writin' out he was careful to suggest to them,
That if they found a hat of his convanient to the dure,
The more they put in, whenever he requested them
The better would the music be for battherin' the flure.

With the toot of the flute,
And the twiddle of the fiddle, O;
Hopping in the middle, like a herrin' on the griddle, O.
Up! down, hands aroun', Crossing to the wall.
Oh! Hadn't we the gaiety at Phil the Fluther's Ball.