Find traditional instrumental music
This is the stable version, checked on 27 December 2021.
Jump to: navigation, search

Back to Philadelphia Fireman's Cotillion (The)

PHILADELPHIA FIREMAN'S COTILLION (THE). American, Country Dance Tune (2/4 time). C Major. Standard tuning (fiddle). AABc. An 1822 dance composition [1] by Philadelphia composer, keyed bugle player, violinist Francis Johnson (1792-1844), who led an all-black orchestra that toured the United States and Europe. The piece is "respectfully dedicated to Members of the Fire Association". Derivative tunes have entered the tradition, including the "Fireman's Quickstep", a derivative fife tune from the American Veteran Fifer (1905, where it is credited to A.F. Hopkins), and "Fireman's Dance (The)", published in Trifet's Cornucopia of Music (1888). A tune called the "Fireman's Dance Cotillion (The)" was collected in the field from Pennsylvania fiddler Jehile Kirkhuff, and may be a very distanced version in the first strain of Johnson's tune. 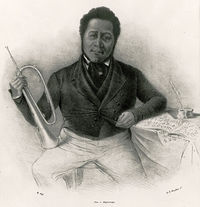 See Jim Brown for a caricature on a songsheet cover that has been suggested is based on Johnson. If so, it is an unfortunate denigration of the man's very real achievements.

Back to Philadelphia Fireman's Cotillion (The)