Back to Phillida Flouts Me[edit]

PHILLIDA FLOUTS ME. AKA - "Phillida." English, Air (3/8 time). B Flat Major. Standard tuning (fiddle). AABBC. The 16th century ballad "Phillida flouts me; or, The Country Lovers Complaint" appears in printed broadside sheets (it is in the Roxburghe collection) and in John Watts' Musical Miscellany vol. 2 (1729). The air was the melody for songs in The Quaker's Opera (1728), Love in a Riddle (1729), and Damon and Phillida (1734). Chappell notes that Walton's Angler (1653) references the tune when the Milkwoman asks, "What song was it, I pray? Was it 'Come Shepherds, deck your heads', or 'As the noon Dulcina rested', or 'Phillida flouts me'?" The tune was also called "Love one another," derived from a song called "The Protestant Exhortation," published by John Playford in 1680, though in a "ruder and therefore probably earlier version of the one given" (in his Popular Music of the Olden Times, vol 2). 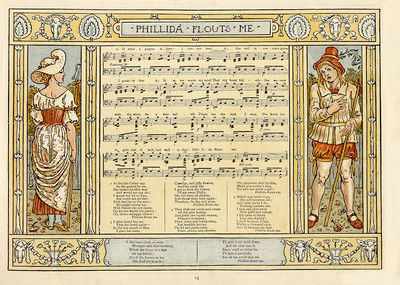 O what a plague is love! I cannot bear it,
She will inconstant prove, I greatly fear it.
It so torments my mind, That my heart faileth,
She wavers with the wind, As a ship saileth.
Please her the best I may, She loves still to gainsay,
A-lack, and well aday! Phillida flouts me.


See also listing at:
Hear a 1928 recording of the ballad sung by English tenor John Coates on youtube.com [2] and at the Internet Archive [3]

Back to Phillida Flouts Me[edit]