Back to Portsmouth Hornpipe (1)

PORTSMOUTH HORNPIPE [1]. AKA - "Freemason's Reel." AKA and see "Whiskey You're the Devil." :Irish, English?, American; Hornpipe. USA, New England. A Major. Standard tuning (fiddle). AABB. likely have been named for the harbor city of Portsmouth, New Hampshire. The tune was included in the 1859 music manuscript collection of American musician M.E. Eames, who was perhaps from Philadelphia. An early 78 RPM era recording of the tune was made by Mellie Dunham (Norway, Maine), who was billed as Henry Ford's Champion Fiddler, although the label lists "Lady of the Lake" as the name of the piece--Lady of the Lake was the dance for which Dunham played "Portsmouth Hornpipe" as an accompaniment. 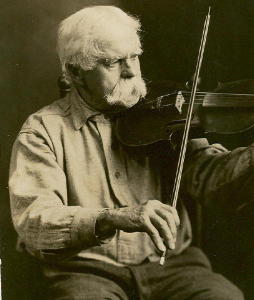 Back to Portsmouth Hornpipe (1)