Find traditional instrumental music
This is the stable version, checked on 28 May 2019. 1 pending change awaits review.
Jump to: navigation, search

Back to President Garfield's Hornpipe 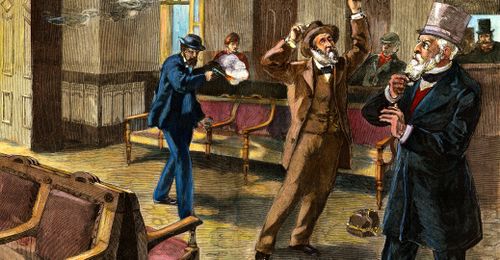 American President James A. Garfield, the twentieth U.S. chief of state (elected in 1880) was assassinated by a lone anarchist, a European immigrant named Charles Guiteau on 2 July, 1881, shortly after taking office, making his one of the shortest terms in that office.

The composition is credited to Harry Carleton in Ryan's Mammoth Collection (1883); Carleton (whose name is perhaps a pseudonym) is thought to have been a journeyman composer in the Boston, Mass., area, who contributed several tunes to Ryan's Mammoth, most having titles associated with the post-Civil War North. "President Garfield's" proved one of the more popular tunes from Ryan's collection, and became a staple at New England dances. However, it also has been widely disseminated in the past century and a half, becoming a popular hornpipe, for example, among Maritime Canadian fiddlers. Northumbrian concertina player Alastair Anderson introduced the tune into Northumbrian repertoire, finding it in Kerr’s Merry Melodies, vol. 2, but also being influenced by hearing New England fiddler Rodney Miller play it. As “Garfield’s Hornpipe” it is on Missouri fiddler Charlie Walden’s list of ‘100 essential Missouri fiddle tunes’.

Back to President Garfield's Hornpipe