Find traditional instrumental music
This is the stable version, checked on 6 September 2020.
Jump to: navigation, search

Back to Princess Beatrice Hornpipe

PRINCESS BEATRICE Hornpipe. Scottish, Hornpipe. G Minor ('A' part) & B Flat Major ('B' part). Standard tuning (fiddle). AABB. Composed by W.B. Laybourn (1835-1886), a hornpipe composer who was born in London but spent time in North Shields in northern England before moving to Edinburgh. It is one of his better compositions and has been reprinted several times, into the modern era. 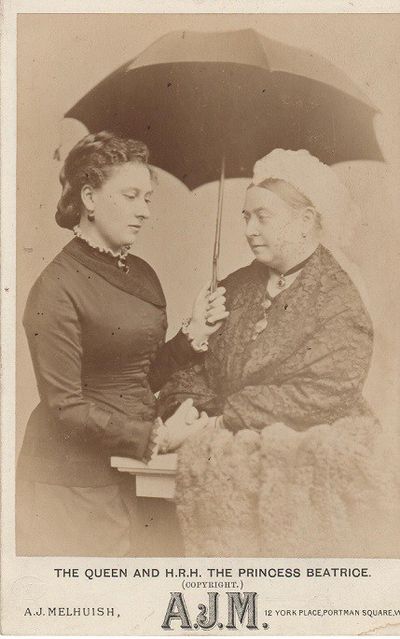 Princess Beatrice [1] was born on April 14, 1857 at Buckingham Palace in London, England. She was the youngest of the nine children of Queen Victoria and Prince Albert of Saxe-Coburg and Gotha. The tune (along with "Princess Beatrice Galop") was probably composed in honor of her marriage in 1885 to Prince Henry of Battenberg, who was the brother-in-law of her niece Princess Victoria of Hesse and by Rhine. Victoria, who had lost her beloved spouse Prince Albert in 1861, could not bear to be parted from Beatrice, however, and a condition of her consent to the marriage was that the couple would reside with her and that Beatrice would continue to function as her secretary. Prince Henry died in Africa some ten years later of illness contracted while serving in the Anglo-Asante War, but Beatrice lived to age 87, still serving as Victoria's literary executor and journal editor.

Back to Princess Beatrice Hornpipe