Pull Down the Blind

Find traditional instrumental music
This is the stable version, checked on 23 October 2021.
Jump to: navigation, search

Back to Pull Down the Blind

PULL DOWN THE BLIND. AKA and see “Somebody’s Watching.” Irish, Waltz (3/4 time). D Major ('A' and 'C' parts) & G Major ('C' and 'D' parts). Standard tuning (fiddle). AABCCD. A "Pull down the blind" waltz was published in New Jersey in 1876, arranged by A. Peck. It has a somewhat similar first strain to the Irish versions, but the second strains are entirely different. However, "Pull down the blind" began as music hall song written and composed by Charles McCarthy--the title being a well-established gag line: 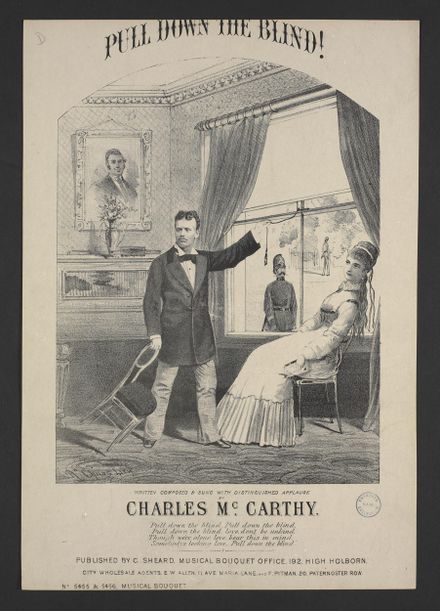 Did you every make love? If not, have a try.
I courted a girl once, so bashful and shy,
A fair little creature, who, by the by,
At coaxing and wheedling had such a nice way;
Ev'ry night to her house I went
In harmless delight our evenings were spent,
She had a queer saying, whatever she meant,
For whenever I entered the house she would say:

Back to Pull Down the Blind