PUNKIE WILLIE. Scottish, Strathspey. A Minor. Standard tuning (fiddle). AABB. William 'Punkie Willie' Ewing was a town character of mid-19th century Carluke, South Lanarkshire, Scotland, who stood out because of his eccentric ways. A chimney sweep (census reports also say he was a 'Pedlar'), he also assumed the role of town crier, and would walk the street while crying the events of the day and tinkling a small hand-bell. He was born around 1812 in Carnwath, and lived into the 1890's. It seems his son William was also known as 'Punkie Willie' in his own day, and also was a chimney sweep. 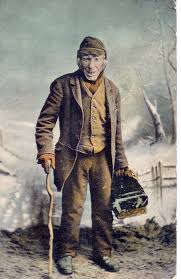