Find traditional instrumental music
This is the stable version, checked on 14 October 2020.
Jump to: navigation, search

Back to Rainbow Schottische 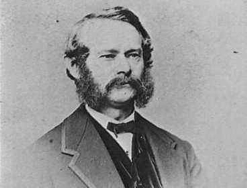 Kleber was a mid-19th century composer from Pittsburgh, who turned out popular music for the ballroom, producing a variety of waltzes, schottisches, polkas, and quadrilles. He was also a friend of songwriter Stephen Foster. Ken Emmerson, in his book on Foster entitled Doo-dah! (1997) traces the long friendship of the pair. Kleber (1816-1897) was a native of Darmstadt, Germany, who emigrated in 1832 to settle in the Pennsylvania city, following his father who had settled there some years earlier. An educated musician, Kleber soon found employment at an exclusive girls’ academy run by a Mr. Lacy, although the school closed in the scandal that ensued after a student eloped. He was a talented musician with an entrepreneurial spirit, and performed in concerts as early as 1836 (he had a pleasant tenor voice in addition to his instrumental skills) and was a church organist and choirmaster. In addition he formed a male vocal group called the Troubadours (which included his brother Augustus) and a brass band. Finally, Kleber was a member of the Pittsburgh Philharmonic Society (a precursor to the Pittsburgh Symphony), and sometimes accompanist with the group. Like many musicians Kleber supplemented his income by giving music lessons and by hosting informal soirées musicales, showcasing the talents of himself, his students and special guests. At some point Kleber must have realized that a more secure and steady income could be had in the retail market, and he opened a music business in 1845, H. Kleber and Bro., partnering with his brother Augustus. It thrived, and he moved to more spacious quarters in 1850 at 301 Third Street that he advertised as the “Sign of the Golden Harp.” He was awarded the Pittsburgh franchise for the sale of Steinway Pianos, and he competed with a rival music establishment run by rival John Mellor for the right to sell Chickering pianos as well. He was the Pittsburgh agent for the New York publisher Firth, Pond & Co., which not only published Kleber’s compositions but also those of Stephen Foster’s. Meanwhile Kleber graduated from the informal musical evenings to become an concert impresario, hosting pianist Louis Moreau Gottschalk for one, a concert pianist aligned with Chickering pianos. Kleber was a success in his profession, well-known in Pittsburgh, and well-off due to his business acumen and musical talent. His house was handsome, and he traveled comfortably in Pittsburgh society.

One gets a picture of Kleber, who was rather short in stature, as a energetic individual at home with the capitalist rough-and-tumble of a city rapidly expanding as a regional center of commerce and culture. He could be irascible, and his passion could sometimes devolve into irascibility. When a bad review appeared in print in 1850, Kleber borrowed a cowhide whip from his brother Augustus and set out in search of his critic. Upon finding him, Kleber thrashed the unfortunate writer, who only escaped serious injury by running into his house and crying “Murder!” out the window until assistance arrived. The brothers Kleber were arrested and released on bail, and, while Henry seemed to feel his honor was satisfied, Augustus now felt himself aggrieved. He found remedy in thrashing the unfortunate critic once again, chasing him into a dry goods store and whipping him again in the presence of several terrified women customers. Augustus and Henry were both fined $100.00 plus court costs.

According to Morrison Foster, Stephen’s brother, and the Pittsburgh Bulletin (March 9, 1896), Henry Kleber taught Stephen music, specifically the piano (although Foster played the flute as well). The Kleber and Foster families even lived near each other, in Allegheny City. Kleber sold Foster’s songs from his Third St. establishment, advertising ten of “Stephen C. Foster’s latest songs.” In 1850 Foster dedicated one of his instrumental pieces, the “Village Bells Polka” to Kleber, who returned the favor with his “Spirit Polka” in 1851. When Foster died Henry conducted the choir (in Harwood’s setting of Alexander Pope’s poem “The Dying Christian to His Soul”, then sang a solo (that the Pittsburgh Post said had “never been excelled and rarely equalled”) an aria from Handel’s oratorio Joseph and his Brethren. Kleber himself died in the winter of 1897, after a bout with influenza. The Pittsburgh Bulletin remarking in his obituary: “His marked personality, his forceful character, strong likes and dislikes; intense love of music, and a signal ability as a singer, musician, composer and business man, were traits that united to render him a conspicuous member of musical, social and business circles for a period extending over more than three generations.”

Back to Rainbow Schottische