Find traditional instrumental music
This is the stable version, checked on 7 July 2021.
Jump to: navigation, search

Back to Red Steer

RED STEER. AKA and see "Brown's Dream (1),” “John Brown's Dream." American, Reel (cut time). A Major. GDgd or AEae tuning (fiddle). The "Red Steer" version of the tune is sourced to the playing of fiddler John Dykes (c.1882- 1940's?) , of the Kingsport, northeast Tennessee, area (on the border with Virginia), leader of the Dykes Magic City trio, which also included Myrtle Vermillion on autoharp and Hub Mahaffey on guitar (with vocals sometimes later supplied by Dykes' brother-in-law, Dock Boggs). Kingsport at the time was boosting itself as “the magic city” because of it’s progressiveness. An article in the Kingsport Times on February 18th, 1927, reported “The Kingsport Trio, known as John R. Dykes’ string band…were introduced by Kiwanian T.R. Bandy [who] announced that this trio had been selected out of a group of 50 such organizations by the Brunswick Phonograph Company, of New York, to make records.”

The trio recorded "Red Steer" in New York in March, 1927, for Brunswick records, although the 78 was not released until January of the following year ("Red Steer" was backed with "Callahan's Reel"). The reel is a member of the “John Brown’s Dream” family of tunes and is a tune associated with another fiddler, Fiddlin' Cowan Powers (1879-1953), who was active in the teens and twenties in the same southwestern Virginia/northeast Tennessee area, who had recorded it in 1924 (as "Brown's Dream (1)"). Richard Blaustein sees similarities in the first strain with Dykes's “Callahan Reel” and a tune called “Boatman”; and in the second strain with “Paddy Won't You Drink Some Good Old Cider.” 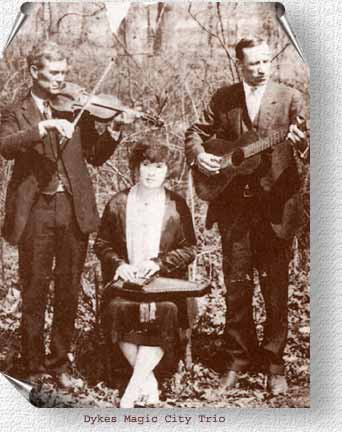 Back to Red Steer