Find traditional instrumental music
This is the stable version, checked on 27 October 2019.
Jump to: navigation, search

Back to Red Wing

RED WING. AKA and see "Reel du moulin." American (originally), English, Canadian, Australian; Air and Two-Step. USA; Wisconsin, Missouri, western Massachusetts, western New York, Pennsylvania, Arizona. England, East Anglia. Canada; Prince Edward Island, Quebec. G Major. Standard tuning (fiddle). AB (Perlman): ABB (): AA'B (Phillips): AA’BB’ (Johnson). “Red Wing” [1] was composed by the prolific songwriter Kerry Mills [2] (1869-1948) in the early years of Tin Pan Alley and published in 1907, with lyrics by Thurland Chattaway. Jim Kimball explains it was subtitled "An Indian Fable" or "An Indian Intermezzo" and was part of a fad for things Native-American that swept the country in the first decade of the 20th century. Kimball believes it was commonly recorded on early 78's as a Two Step. In addition to “Red Wing,” Mills also composed “Barn Dance,” "Georgia Camp Meeting" and "Whistlin' Rufus" all of which have entered American fiddling tradition. It begins, "There Once was an Indian maid..." which Woody Guthrie turned into his song "There Once Was a Union Maid." The melody was a very popular staple at northern Wisconsin old time dances (Leavy) and was also recorded as having been in the repertoire of Arizona fiddler Kenner C. Kartchner, and Buffalo Valley, Pa., region dance fiddler Harry Daddario. It was also popular in New England, and in Québec, has been called “an almost canonical part of the Franco-American tune repertory” (liner notes, “Mademoiselle, voulez-vous danser?”). In East Anglia, England, the melody was a common dance tune, while in America various singing calls for western squares were set to the tune. 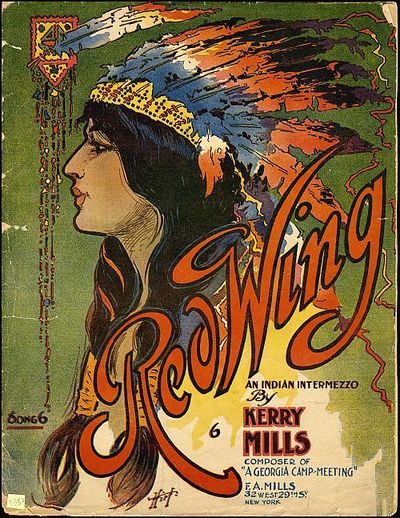 Now the moon shines tonight on pretty Red Wing,
The breeze is sighing, the night bird's crying
For afar 'neath his star her brave is sleeping,
While Red Wing's weeping her heart away.

These words, which refer to World War I, appeared in England, where “Redwing” was played by country musicians as a polka:

Oh the moon shines bright on Charlie Chaplin
His shoes are cracking, from want of blacking,
And his little baggy trousers they want mending,
Before they send him, to the Dardanelles. ....(Courtesy of Ed Caines)

Folklorist Jim Kimball posted on the internet the delightful tidbit that he once knew an elderly Seneca Indian named Avery Jimerson, who was a fine traditional singer from the Allegany reservation. It seems that Avery had a particular fondness for "Red Wing" (Kimaball speculates because of both musical content and racial pride) and remembered an older chief who had played it on fiddle for community square dances. Kimball himself remebers the tune being used for singing calls around western New York, though in recent times it seems to have gone out of favor with callers, “but the old-timers still like to sing along with the chorus.” Australian Graham McDonald added that “Redwing’s” popularity traversed the Pacific to that continent and was played by “just about every old-time dance musician in Australia, and used for just about every possible dance, even the waltz.” Tom Paley informs that a Swedish tune, “Wanderer’s Tune from Boda” is nearly identical with “Red Wing” and won a prize for its composer on Swedish radio sometime in the 1930’s.

Several writers have noted that Schumann’s "The Happy Farmer,” piano solo Op. 68, No. 10, bears a resemblance to “Red-Wing,” although only in the first part. Quebec musicians Isidore Soucy (fiddle) and Donat Lafleur (accordion) recorded a version of "Redwing" in 1938 under the title "Reel du moulin."

Back to Red Wing