Reel of Tulloch (The)

Find traditional instrumental music
This is the stable version, checked on 27 July 2021.
Jump to: navigation, search

Back to Reel of Tulloch (The)

REEL O'/OF TULLOCH, THE ("Ridhle Thulichun" or "Ruighle Thulaichean"). AKA - "Tulloch." AKA and see "Cumming's Rant," "Hamilton House," "Hullichan Reel," "Reel of Thulichan." Scottish; Pipe Reel and Strathspey. A Major/A Mixolydian. Standard tuning (fiddle). AB (Athole, Kennedy, Martin): AAB (Hunter, Köhler, Martin/2002, Neil, Skinner, Skye): AABB (Bremner, Emmerson, Kerr): AABB’ (Gow): AABBC (Gunn): ABCDEFGHIJKLMNO (Johnson): AABBCCDDEEFFGGHHIIJJKK (Cumming): AABCDEFGHIJKLMNOPQRSTU (McKercher). The reel was originally a very popular 17th century bagpipe piece, probably by an unknown composer, known among pipers as “Righ na m Porst,” or ‘king of airs’ (according to James Logan, 1831). Logan says the “It is stated by MacDonald that this reel was composed at Tulloch, in Aberdeenshire, a tradition that I have often heard repeated, detailing the particular circumstances connected with its production.” However, in MacGregor's collection of poems it is confidently stated that the tune was composed by John Dubh Gear, a MacGregor of Glen Lyon [Logan, p. 260]. J. Scott Skinner as well, in Harp and Claymore (1904), remarks: “There is a tradition that this wild effusion was composed and danced by John Macgregor, Castle Grant, about 1640.” MacDonald once remarked that this reel was composed at Tulloch in Aberdeenshire, and this assertion has survived in tradition. Legend has it, remarks Nigel Gatherer, that the reel was improvised on the spot by a MacGregor who had just emerged victorious from a fight with a Robertson for the hand of the Laird o’ Tulloch’s daughter. O’Neill (1922) declined to print stories of the tunes origins as “too unreliable,” and remarks that they include “A wild orgy of dancing under improbable circumstances in one case, and a desperate encounter with swords in another, are given as the inspiration of what has been termed ‘the maddest of all Highland reels’". Another story has it that both dance and tune were composed at an impromptu dance around the year 1690 outside the Kirk of Tullich (near Ballater, Aberdeenshire), that occurred when the minister failed to arrive for a scheduled service. The parishioners clapped their arms and stamped their feet to ward off the bitter cold and snow, encouraged by circulating flasks of whisky. These movements escalated into arm swings with one another accompanied by reel steps to further keep warm. "Another version of the story adds that when the minister finally arrived, heavily delayed by the weather, he soundly rebuked his dancing parishioners for their act of sacrilege. Not a single one who took part, it is said, is to have survived the year!"[1]. 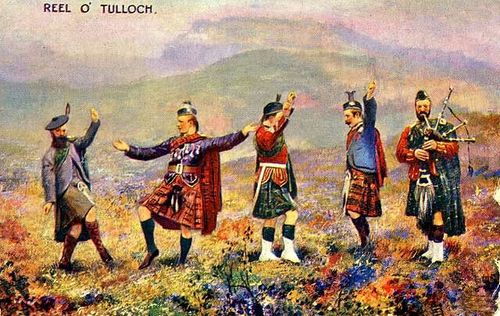 As we enter Strathspey by the Abernethy forest, we pass through the district of Tulloch, the scene and birthplace of the famous reel of Tulloch. Here, some two hundred years ago, lived the laird of Tulloch, with his lovely daughter Isobel. To her came many suitors from many lands, for she had beauty and her father had wealth. Among them was a MacGregor, whom the maiden secretly loved, and a Robertson, whom her friends favoured, but whom she disliked. As time went on, the rivalry between these suitors became fierce, until the Robertson resolved on the destruction of the MacGregor. Getting together a small party of his own clan, he surprised the MacGregor as he wandered down Speyside with the lovely Isobel. But the MacGregor was more than a match for the Robertsons, whom he kept at bay until he reached the friendly shelter of a barn. Dashing in there, he kept them all at a distance until Isobel had barricaded the door, and then he picked them off with his musket, which Isobel loaded for him as fast as he could discharge it. And so he destroyed the whole band, which included the treacherous brother of the persecuted damsel. Thereupon the MacGregor issued from his shelter and, seizing the pipes celebrated his victory by playing a new dance, which he composed in a moment of fierce inspiration. And this was the famous Reel of Tulloch, and the date of the story was in or about the year 1640. The story goes on to say that the brave MacGregor and the fair Isabel were apprehended and imprisoned; the MacGregor was shot, and when his head was pre- sented to the lady, she immediately died of grief. [...] Another traditional account describes the dance over MacGregors (or Robertsons) skulls in a barn, where they had been assassinated. There are other versions of the story, and several versions of the song; they do not all agree in detail. When Balmoral was being built, I knew several men from Skye who went to work there every year, and the story they heard at Braemar was that there were several people kicking skulls in a barn. One would say, giving a kick from behind, ‘Bho chùl a’ chinn,’ and another would reply, kicking the skull from the front, ‘Bho bheul a’ chinn,’ which being done, quickly descended into ‘Bho Thulaichean gu Bealaichen, and that this way the dance originated; but I do not recollect the full particulars.

“The Reel of Tulloch” has for several centuries been used in Scotland for a specific dance for males which is always performed to the tune, and it has been quite dominant at Highland dances for several centuries. Instructions for the popular dance, but not the melody, appear in the Menzies Manuscript (contained in the Atholl Collection of the Sandeman Library, Perth), 1749, which carries the alternate title "Mighty Pretty Valley (The).” J. Scott Skinner, the celebrated violinist who was also dancing master, routinely taught the dance to his students throughout the latter 19th century. He states in Harp and Claymore (1904): “The ‘Reel of Tulloch’ is practically the same tune (as “Reel o’ Thuilleachan’), but requires two different sets of steps. First the four kilted Highlanders, by whom it is properly danced, go through the Figure 8, after the usual style of a reel, and dancing Highland Fling and Strathspey steps; then they break into the quick time of the Hoolichan.” Another "Reel of Tulloch" (Ruidhleadh Thulachain), a country dance for two mixed couples, was composed around 1800, and appears in dance literature in 1844 (in The Ballroom Annual), though it was mentioned in accounts of dances from the year 1819 onward. Flett & Flett conclude the dance was originally a 'society' dance which was developed at the Breadalbane Balls, although Christine Martin (2002) says the dance is also said to have been composed by parishioners waiting for their minister who was late. Some exercise helped to pass the time, the story goes, and lead to the formation of the dance. Martin says that “it was originally a popular dance in its own right, but by the late 19th century it was almost always danced immediately after the Foursome Reel.” It was a particular favorite of Queen Victoria, states Hunter (1979), who first witnessed its performance at a ball at Taywouth Castle given by the Marquis of Breadalbane (the dancers on the occasion were the Marquis of Abercorn, the Hon. Fox Maule, Cluny Macpherson and Davidson of Tulloch). In most parts of Scotland the dance was performed to the tune "The Reel of Tulloch" but in Roxburghshire and Berwickshire, where the dance was often known as "The Hullachan Jig," a double jig such as "The Irish Washerwoman" was played. For an extensive discussion of the dance and its origins see Flett & Flett (Traditional Dancing in Scotland), 1964, pp. 132–155.

The earliest appearance of the melody is in David Young's 1734 Duke of Perth Manuscript (AKA the Drummond Castle Manuscript, Part 2 (No. 9), where it appears as "Tullich Reel" with 160 bars of variations) and it was later reprinted in his 1740 MacFarlane Manuscript (Part 2, No. 115, p. 170). Purser (1992) states that it was adapted for the violin “with superb rhythmic pointing and syncopations, mostly composed by David Young in 1740.” The piece subsequently appears in Robert Bremner's 1757 collection (Curious Collection of Scots Tunes), the Gillespie Manuscript of Perth (1768), Angus Cumming’s Collection of Strathspey and Old Highland Reels (1780), and Davie's 1829 Caledonain Repository (with some pizzicato variations). It also appears on p. 6 of the music 1770 manuscript collection of Northumbrian musician William Vickers [1], about whom unfortunately nothing is known. Johnson (1984) is of the opinion that Young probably composed the three finest sections of the version given in the former’s 1984 volume (parts 'F', 'L', and 'O'). This important melody, which at one time was known as 'Righ na' m Port,' or 'King of Airs', has retained its popularity through the ages and is still part of the pipe repertory today.

"The 'Reel of Tulloch' should be played first as a Strathspey and then as a Reel followed by 'Stumpie' and 'The Deil Among the Tailors,' a welcome combination to enthusiastic dancers,” notes MacDonald in his Skye Collection. Paul Stewart Cranford (1995) remarks that versions of this reel vary in late 20th century Cape Breton, from a simple reel setting to J. Scott Skinner’s elaborate strathspey variations. Emmerson (1971) finds that the tune on close examination reveals itself to be a rant. Peter Kennedy gives “Hullichan Reel” as an alternate title.

Port-a-beul words to "Ruidhle Thulaichean", or "Reel of Tulloch", are loosely attributed to the seventeenth century outlaw Iain Dubh Geàrr (Black John Gare), and relate how he escaped ambush in Killen, then further tells how 'Iseabail Dubh Thulaich' helped him to kill his enemies (amongst whom was her brother) when they attacked Black John in Strathspey.

Back to Reel of Tulloch (The)