Find traditional instrumental music
This is the stable version, checked on 21 April 2021.
Jump to: navigation, search

Back to Reticule (The) 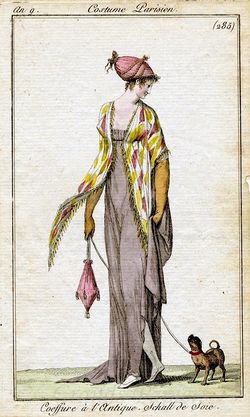 Woman with a reticule and dog.
RETICULE, THE. Scottish, Reel (whole time). F Major. Standard tuning (fiddle). AB (Surenne): AAB (Lowe). "The Reticule" is attributed to "Mr. Robertson" in Joseph Lowe's 1844 collection. A reticule was a woman’s drawstring handbag used in the 18th and 19th centuries, often made of net or beading or brocade. Netting reticules and covering screens was a suitable pastime for a young lady of the era, akin to needlepoint.

County Leitrim piper and fiddler Stephen Grier (c. 1824-1894) entered an untitled reel in Book 2 of his large c. 1883 music manuscript collection (No. 93, p. 20) that has similarities in contour, particularly noticeable in the first measures.

Back to Reticule (The)