Rory of the Hills

Back to Rory of the Hills

RORY OF THE HILLS (Ruaidri na cnoc). AKA and see "King of Leix (The)," "March of the Kings of Laois." Irish, March (6/8 time). D Mixolydian. Standard tuning (fiddle). AB. The tune is usually known nowadays as "March of the Kings of Laois." The title is perhaps associated with the O'Moore/O’More family, states Johnson (1991), whose 16th century head of the family was Ruairí Óg Ó Mórdha. The O’More family lands were in the County Leix, and, when the English sought to usurp them by importing settlers, establishing a new government and renaming the county Queens, Rory and his followers waged a successful six year guerrilla war against them. Though Rory was killed while reconnoitering a force brought against him, his soldiers avenged his death and routed the enemy. O’More’s name became an inspiration and a rallying cry: “God, and Our Lady, and Rory O’More!” (Seamus MacManus). Rory of the Hills has since come to mean the eternal wanderer, the archetypical Irish homeless one. O’Neill (Irish Minstrels and Musicians, 1913), whose version seems identical to Bunting’s “Ruairidhe ua Mordha/March of the Kings of Laois,” printed in his collection of 1809, mentions this tune as a “splendid martial air.”

A story, told by Ann Heymann in her book Secrets of the Gaelic Harp (1988), describes an event in 1599 when the Earl of Essex, the Queen’s representative, visited one of the Lairds of Munster with his guide, a Mr. Delahide. They participated in a great feast at which a harper appeared at the door and asked to entertain the company, as was the custom. Delahide asked in Irish for a certain song he heard the bard perform before and when he the bard complies there was consternation in the audience. When Essex inquired as to the reason for the commotion he was told the the song requested was “The Lament of Ownry Rory O’More,” as Delahide was More’s seanachie. The natives are astonished to hear this tribute to a rebel played before the Queen's representative, and their is some fear of a riot breaking out, as the native Irish gather at both door and window to hear the harp. 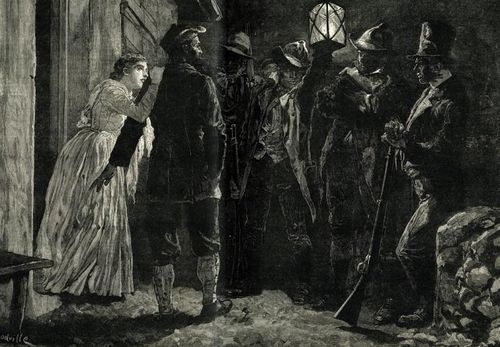 "Rory of the Hills" is the name of a mid-19th century song attributed to Irish nationalist Charles J. Kickham (1828-1882), although there was at least one other unrelated song by that name as well. It was perhaps influenced by the signature 'Rory of the Hills' was a familiar invocation of agrarian pre-Land League agitators who sought redress when it was not meted out by official sources. During the land war numerous missives were sent in the names of Ned of the Hills, Captain Rock, and Captain Moonlight; all similar signatures.

Back to Rory of the Hills