Find traditional instrumental music
This is the stable version, checked on 6 May 2019. 1 pending change awaits review.
Jump to: navigation, search

Back to Roslin Castle

ROSLYN/ROSLIN CASTLE. AKA - "House of Glamis (The)/House of Glams." Scottish, English; March & Air (4/4 time). E Minor (Camus, Mattson & Walz, Neil, Sumner): C Minor (Hunter). Standard tuning (fiddle). One part (Hunter): AB (Camus, Hardie, Mattson & Walz): AABB (Neil, Sumner). The title is variously given as Rosland, Rosline, Roseland, Roslin and Rosslyn Castle. The melody is a British march used by the English army during the (American) Revolutionary War period, says Winscott (1970). Camus (1976) states the tune was the melody most often associated with funerals during the Revolution, and notes that legend has it that it was played by Scottish bagpipers stationed in New York at the time, in honor of the castle at Roslyn, Midlothian, Scotland. It was perhaps in a funereal state of mind that British troops in 1781 played the tune as they marched out the small Long Island, New York, village of Hempstead Harbor. The oppressed residents, however, rejoiced at the sound, and remembering this, in 1844 their descendants changed the name of their village to Roslyn. The Continental forces also employed the tune as a memorial air. For example, during the 1779 campaign against the Iroquois Six Nations two men had been dispatched by tomahawks and left to lay. After they were found a Colonel Proctor ordered his musicians, in passing the spot, to play “Roslin Castle,” whose “soft and moving tones” silenced the regiment and awakened pity for their comrades (Rev. William Roger’s Journal, p. 35). “Rossline Castle, a Dead March” was entered into the c. 1776-78 music copybook [1] of fifer Thomas Nixon (Framingham, Conn.). Nixon was a thirteen-year-old who accompanied his father to the battles of Lexington and Concord, and who served in the Continental army in engagements in and around New York until 1780, after which he returned home to build a house in Framingham. The copybook appears to have started by another musician, Joseph Long, and to have come into Nixon’s possession. The dirge was played as especially appropriate when Washington's Farewell Address was read to the troops encamped at Newburgh, New York, on their disbandment in 1783. 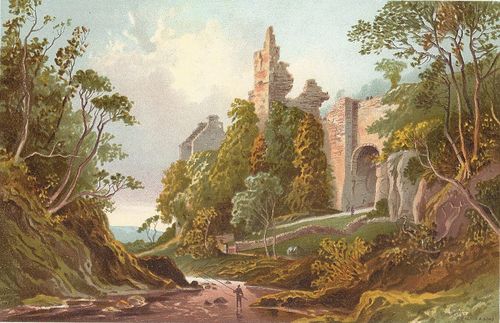 Rosyln Castle [2] does in fact exist in Angus, Scotland, and has since the early 14th century (c. 1304), when it was built by Sir William St. Clair soon after the Battle of Rosslyn, when, as part of the Scottish War of Independence, the English army of Edward I was decimated by the Scots. It is a castle of the rock and waterfall, lying high above the north bank of the River Esk a few miles south-west of Edinburgh, and features a small but magnificent chapel founded in 1446 by the Earl of Orkney and Roslin. Added to through the years, it survived two fires but was ultimately destroyed by Cromwell's troops in 1650. The heyday of the edifice was in the 14th and 15th centuries, where it has been likened to a 'Camelot' of the era. Neil (1991) remarks "It is on record that one of the princesses of the castle had 75 ladies-in-waiting and 53 of them were also members of the nobility, all of whom were beautifully dressed in gowns of velvet and silk and who also wore gold and other jewels. When this princess traveled to her house in Edinburgh, she was accompanied by 200 men on horseback and, if at night, by a further 80 carrying torches. There is also the legend that the castle is haunted by the "Sleeping Lady" who guards a vast treasure. If awakened by the sound of a trumpet, to be heard in the lower apartments, she will appear and reveal the treasure, whereupon the castle would rise from its ruins to its former glory." Recently, the castle was featured in Dan Brown’s book and film The Da Vinci Code.

An interesting anecdote involving the castle and Robert Burns is given in a memoir by the son of the Scottish artist Alexander Nasmyth, about his father:

A visit which the two paid to Roslin Castle is worthy of commemoration. On one occasion my father and a few choice spirits had been spending a "nicht wi' Burns." The place of resort was a tavern in the High Street, Edinburgh. As Burns was a brilliant talker, full of spirit and humour, time fled until the "wee sma' hours ayont the twal'" arrived. The party broke up about three o'clock. At that time of the year (the 13th of June) the night is very short, and morning comes early. Burns, on reaching the street, looked up to the sky. It was perfectly clear, and the rising sun was beginning to brighten the mural crown of St. Giles's Cathedral. Burns was so much struck with the beauty of the morning that he put his hand on my father's arm and said, "It'll never do to go to bed in such a lovely morning as this! Let's awa' to Roslin Castle." No sooner said than done. The poet and the painter set out. Nature lay bright and lovely before them in that delicious summer morning. After an eight-miles walk they reached the castle at Roslin. Burns went down under the great Norman arch, where he stood rapt in speechless admiration of the scene. The thought of the eternal renewal of youth and freshness of nature, contrasted with the crumbling decay of man's efforts to perpetuate his work, even when founded upon a rock, as Roslin Castle is, seemed greatly to affect him. My father was so much impressed with the scene that, while Burns was standing under the arch, he took out his pencil and a scrap of paper and made a hasty sketch of the subject. This sketch was highly treasured by my father, in remembrance of what must have been one of the most memorable days of his life.

After the American Revolution the melody appears to have continued to have been associated with funerals; Rocellus Guernsey stated that it was always used as a dirge during the War of 1812. Alvan Robinson printed it in his Massachusetts Collection of Martial Musick (Durham, Maine, 1818, with editions of 1820 and 1824), and in fact it was commonly published in fife tutors of the day to serve duty for soldier’s funerals. “Roslyn Castle” appeared in the Gillespie Manuscript of Perth (1768), and in numerous English fiddlers’ manuscript books including the Hardy family collection—one of the few slow, purely instrumental tunes in the tradition. In America it was used by the New England composer Jeremiah Ingalls as the vehicle for a hymn. Words to the tune were written by Richard Hewitt of Cumberland, who acted as amanuensis to the Scottish lyric poet Dr. Blacklock (1721-1791). The tune is often attributed to the expatriate Scottish music publisher, composer and dancing master James Oswald (1711-1769), who lived in London for much of his later career, however, the melody had appeared a few years earlier in William McGibbon's (2nd) collection of 1746 under the title "House of Glamis (The)." John Purser believes it possible that Oswald could still have composed it, as he and McGibbon may have played together, and had Freemasonry in common. Oswald, says Purser, “would have chosen to publish it later under the title of words written to it by Richard Hewitt and published by Robert Bremner in 1757” (quoted from the liner notes to Abbey Newton’s album “Castles, Kirks and Caves”).

Gow’s fiddle suddenly burst forth from where he had established his little orchestra. All were of course silent as through his dear strathspeys he bore with highland rage. He changed his strain to an adagio, and suffered his music to die away in the plaintive notes of Roslin Castle…

One of the oddest renditions of “Roslyn Castle” can be heard played by the late 18th century music clock crafted by John Smith of Pittenween, Scotland, on exhibit in the National Museum of Scotland. According to James Dick (The Songs of Robert Burns, p. 477), poet Robert Burns set his verse “The gloomy night is gathering fast” to the air of “Roslyn Castle,” directing so in the 1787 Edinburgh edition of his poems. However, Bruce Olson finds that Burns’ song in Johnson’s Scots Musical Museum (No. 284) and in Thompson’s Scottish Airs is not set to the same tune. The air of “Roslyn Castle” is also employed as the vehicle for the Welsh song “Fenyw Fwyyn (Y)” (The Gentle Woman).

Back to Roslin Castle