Find traditional instrumental music
This is the stable version, checked on 17 September 2021.
Jump to: navigation, search

Back to Sail away Ladies (1)

SAIL AWAY LADIES [1A]. AKA - "Sail away Lady," "Sail away Huldy." AKA and see "Sally Ann (3)." American, Reel (cut time). USA; Kentucky, Tennessee, Missouri. G Major. Standard tuning (fiddle). AB (Silberberg): ABB (Brody, Ford): AABB (Spadaro): AABBCC (Phillips). The tune is melodically related to the numerous versions of "Sally Ann (3)"/"Great Big Taters in Sandy Land," played in the keys of A and G Major. According to Guthrie Meade (1980), the reel is identified with the south central Kentucky and middle Tennessee locals, however, it received wide-spread dissemination in the 78 RPM recording era. The title also appears in a list of the standard tunes in the square dance fiddler's repertoire, according to A.B. Moore in his 1934 book History of Alabama. 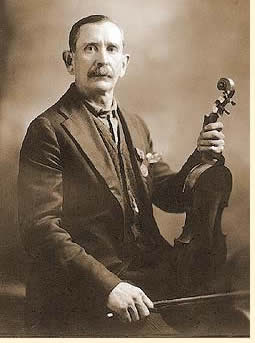 The earliest sound recordings of "Sail away Ladies" were by John L. "Uncle Bunt" Stevens [1] (1926-without words) and Uncle Dave Macon (1927-with words). Stephens was born in 1871 in Tallapoosa, near Lynchburg, southern middle Tennessee, and was a farmer for most of his life. He rapidly rose to fame in 1926 when he placed in regional competitions and then won the title of World Champion Fiddler in 1926 playing this tune, along with his version of “Old Hen Cackled (1) (The),” besting 1,876 other fiddlers in auto magnate Henry Ford’s series of contests. The competitions were held at Ford dealerships through the East and Midwest in the 1920's, and winners of the local contests were brought to Detroit to play in the championship round. Stephens' prize was said to be $1,000, a new suit, a car, and a new set of teeth. Harry Smith (Folkways FA2951, 1952) thought that Uncle Bunt Stephen’s performance (Columbia Records, 1926) was “probably similar to much American dance music in the period between the Revolutionary and Civil Wars.” After recording his four 78 RPM sides for Columbia, and making a short tour with some appearances on the Grand Ole Opry stage, Uncle Bunt retired from public life and returned to his farm in Tallapoosa. He died in 1951. Southern Kentucky fiddler Henry L. Bandy also recorded the tune for Gennett Records in 1928, although the side was not issued.

Paul Wells (Middle Tennessee State University) states that the song was collected around the turn of the 20th century and seems to have been common to both black and white traditions. Tom Paley (former New Lost City Ramblers member) believes the verses of “Sail away Ladies” to be typical floating verses, however, each line is often (but not in every version) interspersed with a group chorus of "Sail away, ladies, sail away!" This call-and-response pattern is common to many genres of music, including Quebecois songs, sea shanties, work songs, and minstrel show pieces, and is not unknown in old-time music, though not common. Couplets set to the tune go:

Children, don't you grieve and cry.
[Sail away, ladies, etc.]
You'll be angels, bye and bye.

Come along, girls, and go with me.
We'll go back to Tennessee.

(I) got the news from Shallow (or "Charlotte") Town.
Big St. Louis is a-burning down.

I chew my tobacco and I spit my juice.
I love my own daughter but it ain't no use.

(Paul Mitchell and others believe that in Macon’s last line the words 'own daughter' (as some hear it), is really dona-- pronounced Dough-nee in the American South--a Spanish/Italian word for a mature love object, a woman.

Another version of this last couplet goes:

I asked that girl to be my wife,
She took at me with a butcher knife

Tennessee Grand Ole Opry stalwart Uncle Dave Macon also included a chorus which went, "Don't she rock, Die-Dee-Oh?” but Paley notes that other old recordings have variants like "Don't she rock, Darneo?" and even "Don't she rock 'em, Daddy-O?" (which seems to harken to the beatnik era). Some unknown “revival” wag re-interpreted Macon’s lines as:

Don't sheetrock the patio ...(x3)
Sail away, ladies, sail away

Musicologist Charles Wolfe (1991) finds the song in several older collections: Brown (1:153), Brewer (165) and a 1903 collection by William W. Newell, Games and Songs of American Children (170). It also appears in a modern collection of African-American songs and games, Jones and Hawes’s Step It Down (174, as “Horse and Buggy”).

English musician Dave Arthur remarks that the song became popular in Britain in the skiffle craze of the 1950’s, and appeared on vinyl EP "Lonnie Donegan Hit Parade vol. 2" (1957), under the title “Don’t You Rock Me, Daddy-O.” A few years later it appeared on the set-list of the band The Quarrymen, out of Liverpool, who metamorphosed into the Beatles.

Back to Sail away Ladies (1)