...Music was both a job and a continuing trial and challenge for other players who occasionally joined him. For Van Kleeck did not maintain the regularity of four- and eight-measure phrases of his dance tunes. Instead, he stretched or squeezed them to quite unpredictable lengths, according to how soon or how late the dancers had completed a call and reached their places to begin the next call. Even within a phrase, or at its ends, the number of beats was variable, for all that they continued to provide a catchy bounce. And, since his accordion supplied its own harmony, when that too changed, at times thus unpredictable, it was trying indeed to follow Van Kleek's lead on other instruments. Many a fiddler and guitar-picker was reduced to timid guesswork when Van Kleeck called. 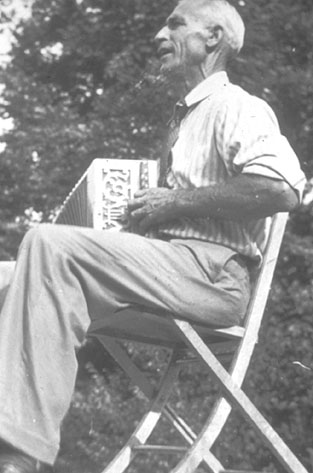 George Van Kleeck
Dance caller George Van Kleeck [Cazden]. Catskill native, farmer, blacksmith, button accordionist and square dance caller George Van Kleek (Samsonville, N.Y.) for twenty years called a weekly square dance at Camp Woodland, and "was always accompanied by his wife Clara, and sometimes the youngsters themselves." Camp Woodland, located near Phoenicia, New York, was a progressive summer camp that operated until 1962 under the direction of Norman Struder with assistance by Herbert Haufrecht and Norman Cazden, that derived from the New Deal programs that provided work for artists. Its mission was "to help children understand the democratic roots of their country by exposing them to the traditions and tradition bearers of the Catskills."