Back to Saturday Night Rag

SATURDAY NIGHT RAG. American, Country Rag (cut time). USA; Texas, Oklahoma, Missouri. G Major. Standard tuning (fiddle). AAB. The tune was first recorded by the Fort Worth, Texas, based group the Light Crust Doughboys for Vocalion Records in 1934, featuring the fiddle of Butler County, Kentucky, native Clifford "Doc" Gross (1898-1956), to whom the tune is attributed. Gross, who perfected his fiddling playing at old roadhouses along the Green River, had moved to Texas to join his distant cousins in a band called the Hi-Flyers, and then floated in a few bands in the 1930's including his own short-lived Kentucky Hillbillies, who played over KTAT in 1933. He joined the Doughboys in 1933, and played lead fiddle on their first recordings, remaining with the band until the late 1930's [1]. A few years after the Doughboys's release the tune was recorded by another Texas group, Bill Boyd's Cowboy Ramblers in a blazingly fast version by fiddler Jesse Ashlock (learned directly from Clifford Gross [2]. Both groups were transitional ones from old-time string band to western swing. They recorded prolifically and appeared in a half-dozen 'B' westerns in the 1940's. 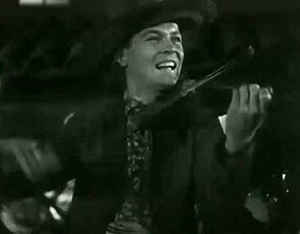 Back to Saturday Night Rag