Find traditional instrumental music
This is the stable version, checked on 29 April 2022.
Jump to: navigation, search

Back to Seven Stars

SEVEN STARS. AKA and see “Grand Parade (1) (The),” "Moon and Seven Stars (The)." English, Country Dance Tune (6/8 time). England; Northumberland. D Major. Standard tuning (fiddle). AABB. The ‘seven stars’ are the constellation of the Pleiades, the seven sisters, easily found in northern hemisphere skies. "Seven Stars" is one of the "missing tunes" from William Vickers' 1770 Northumbrian dance tune manuscript. Knowles (1995) and Callaghan (2007) remark that the tune is a popular jig, then and now, found in many northern English manuscripts. An influential version appears in the c. 1798 Joshua Jackson (1763-1839) manuscript from north Yorkshire, a version many modern fiddlers learned after it was included on the “Trip to Harrowgate” album. It also appears in the 19th century music manuscripts of the Matthew Bethan (Towcett, Cumbria, 1815), Rev. Robert Harrison (Brampton, Cumbria, 1820), the Hardy family (Dorset), William Vickers (Northumberland, 1770), Laurence Leadley (Thirsk, North Yorkshire, as “The Grand Parade”), Joshua Jackson (north Yorkshire) and John Winder (Wyresdale, Lancashire, 1789). James Aird included the melody in his Selection of Scotch, English, Irish and Foreign Airs, vol. 1 (1782, p. 4), published in Glasgow, Scotland. Its origins, however, can be traced to David Rutherford's Compleat Collection of 200 of the Most Celebrated Country Dances, vol. 1 (p. 11), published in London in 1756. Charles and Samuel Thompson published it again in 1780 in Thompson’s Compleat Collection of 200 Country Dances, vol. 4. The tune (sometimes as "The Moon and Seven Stars") was very popular in America after the Revolutionary War, with the Elisha Belknap (Framingham, Mass., 1784), Ira Clark (Simsbury, Conn., c. 1801), Micah Hawkins (New York, 1794), Luther Kingsley (Mansfield, Conn., 1795-c. 1815), Thomas Nixon (Danbury, Conn., c. 1776-1778) and Whittier Perkins (Massachusetts, 1790) manuscripts dating between 1776 and 1801 all listing the tune. See also note for "The Moon and Seven Stars." 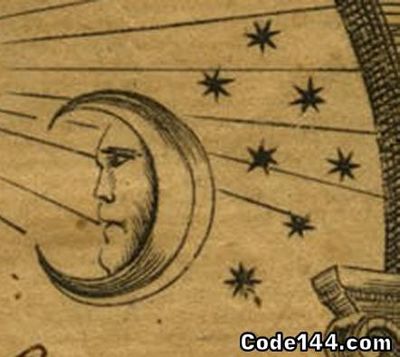 The moon and seven stars depicted on a Masonic object, from the 18th century Boston workshop of Paul Revere.

The “Seven Stars” melody appears in the music manuscript collection of the brothers Bast, from Denmark, compiled during the years 1763-1782. In 1782 one of the brothers entered the priesthood, and presumably gave up recreational music at that time. It appears in their copybook under the title “Frederiks kontra.” The American variant title, “The Moon and Seven Stars,” is perhaps derived from freemasonry, writes New Hampshire fiddler Randy Miller, “where the moon rules the night, and the seven stars signify the Seven Sisters, the Pleiades star cluster, as well as the seven-day division of time.”

An inn called the Seven Stars in Withy Grove, Manchester, purports to be one of the oldest inns in existence, with documents indicating it was a hostelry prior to 1356. The name was a popular one, however, as there were many such-named, particularly in Cornwall. An establishment at Prestwich, England, was known by the title Same Yet, but was formerly known as the Seven Stars. At some point it had become necessary for the old sign of the Seven Stars to be repainted due to fading, and when the painter asked the landlord what he was to put upon the board he received the answer “The Same Yet.” And the man took him at his word (Hawkwood, 1909). There was also the The Moon and Stars in Norwich, The Half Moon and Star in Ipswich and The Half Moon and Seven Stars in Brentford[1].

Back to Seven Stars