Find traditional instrumental music
This is the stable version, checked on 29 March 2020.
Jump to: navigation, search

Back to Shanghai Rooster (2) (The)

SHANGHAI ROOSTER [2], THE. American, Reel (cut or 2/4 time). USA, Midwest. G Major. Standard tuning (fiddle). AABB. R.P. Christeson collected "Shanghai Rooster [2]" from an unknown fiddler, and even though he played piano on the field recording Christeson did not name his source. He also did not know the provenance of the tune, but concluded it must be a Midwestern reel. 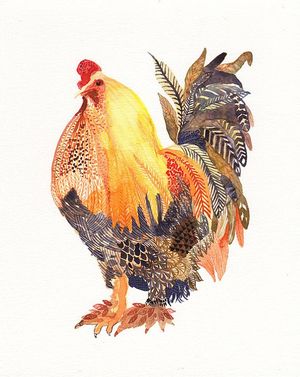 A ‘Shanghai’ rooster was a fixture in the American barnyard, and as such has been celebrated in American vernacular song. A piece called “Crow Out, Shanghai” is one of a medley of tunes arranged by New York bandleader David L. Downing, a prominent Civil War era arranger of such pieces as “Dixie’s Land Medley Quick Step” (1861) and the “Kazoodie Ko Whirl Overture” (1852). Downing’s tune resembles “Cluck Old Hen,” and the text appears on an undated broadside published by J.H. Johnson of Philadelphia. It compares men’s extravagant social displays with a strutting barnyard cock, and begins:

You may talk about your Shanghais, but they are getting stale,
Our dandies now can take e'm down, for they've a longer tail;
With women's shawls upon their backs, they strut both night and day,
But when the tailor sends his bill they have no cash to pay.

A melody entitled “Shanghi Chicken” was played by J.R. Simonton, of Logansville, Georgia, in the Georgia Old-Time Fiddler’s Convention of 1913, according to the Atlanta Constitution, while the night before C.C. Moon played a tune called “Shanghai.” .

Back to Shanghai Rooster (2) (The)