Shove that Pig's Foot a Little Farther in the Fire 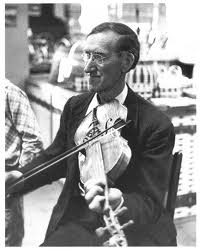 Marcus Martin, 1881-1974
SHOVE THAT PIG'S FOOT A LITTLE FARTHER IN THE FIRE. AKA – “Push that Pig’s Foot a Little Further in the Fire,” “Push that Pig’s Foot Closer to the Fire.” American, Reel (cut time). USA, western North Carolina. G Major. Standard tuning (fiddle). AB (Silberberg): AABB (Phillips, Songer). A ‘pig’s foot’ is a blacksmith’s tool that somewhat resembles a crowbar or poker, used to manipulate pieces of pig iron in a forge. The tune was originally recorded by western North Carolina fiddler Martin Marcus on an LP where he played it as a duet with his son Wayne. Marcus also recorded it for the Library of Congress in the 1940's. Martin was influence by E. Tenn. fiddler J. Dedrick Harris, who played regularly with Bob Taylor in the latter's bid for Governor of Tenn. in the late 1800's. Joel Shimberg (who says tongue-in-cheek, “Surely it’s a barbecue song”) learned the following verse to the (low part of the) tune from Mike Seegar:

The melody can be heard in the film Cold Mountain, albeit the producers saw fit to rename it “Ruby with Eyes that Sparkle.”