Find traditional instrumental music
This is the stable version, checked on 20 October 2021.
Jump to: navigation, search

Back to Silver Bells

SILVER BELL(S). American, Song Tune (cut time). D Major ('A' part) & G Major ('B' part). Standard tuning (fiddle). ABB'. This tune, originally a 1910 Tin-Pan-Alley song with words by Edward Madden and music by Percy Wenrich (the latter born in Missouri but moved to New York City two years before the song was published, the beginning of an important career on Tin-Pan-Alley). Like "Red Wing" it tells of Indian maids being courted by cowboys and chiefs. 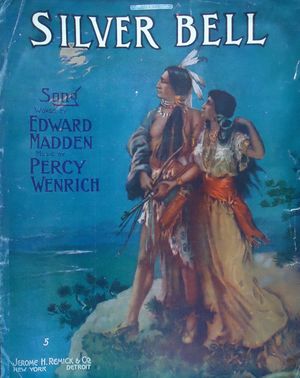 Beneath the light of a bright starry night


Sang a lonely little Indian maid.
"No lover's sweet serenade
Has ever won me."
As in a dream, it would seem, down the stream,
Gaily paddling his tiny canoe,
A chieftain longing to woo
Sang her this song:

CHORUS: "Your voice is ringing,
My Silver Bell.
Under its spell,
I've come to tell
You of the love I am bringing,
O'er hill and dell.
Happy we'll dwell,
My Silver Bell."

“Silver Bell” was absorbed into old-time repertoire in the 1920’s and its popularity among fiddlers cemented a decade later by Texas bandleader Bob Wills. However, old-time versions were earlier recorded by Clayton McMichen (Ga.), Ernest Stoneman and Jess Young (Tenn.). The earliest sound recording of the song, however, was by Ada Jones and Billy Murray, for Edison in 1910 (Ed 10492). Stacy Phillips notes that the tune has been recorded in the keys of G, C and B Flat as well, and that sometimes there is no key change in the second part.

Back to Silver Bells