Back to Sir John Fenwick 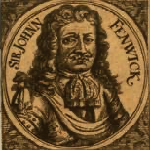 SIR JOHN FENWICK'S (THE) FLOWER AMONG THEM ALL. AKA – "Flower among them all," “John Fenwick’s the Flower Amang Them.” AKA and see “Captain Fenwick,” “Flower of Yarrow,” “Long Cold Nights,” “Mary Scott (2) (the Flower of Yarrow).” English; Air or Waltz (3/4 time). England, Northumberland. G Major (most versions): A Major (Cocks). Standard tuning (fiddle). AABB. Sir John Fenwick was the Provost of Berwick on Tweed who is supposed to have joined the Jacobites on their heady march south after their victory at the battle of Prestonpans. "There are but few of those interesting memorials of ancient days now left amongst us of the class to which this melody belongs, viz., the 'Gathering Tunes', or tunes played to collect the tenants and retainers of some Border chief to the fray. This air is one of the best, not only for its own characteristic beauty, but also for the melancholy historic associations connected with it. It is traditionally stated that it was the tune to which the Jacobite friends of the brave and unfortunate Sir John Fenwick marched to his seat at Wallington when he was concerting plans for the overthrow of William of Orange and the restoration of James the Second. A few years afterwards this song, thoughtlessly sung, cost two of the gentlemen of the county their lives. The incident is related in Brand's History of Newcastle, vol. II, p. 504. The tune is given in William McGibbon's Collection of Scotch Airs, published about 1740, under the name of 'Mary Scot,' but this date is much later than the time of its popularity in Northumberland. The late Mr. John Bell, of Gateshead, in his efforts to collect and preserve local lyrics, wrote to Sir Walter Scott in 1816, asking him, if possible, to furnish him with some information about Northumberland Jacobite songs, naming amongst others 'Sir John Fenwick's the Flower Amang Them'. Sir Walter, in his reply, states: 'I have heard words somewhat similar, alluding probably to some election business—

But you know,' continued Sir Walter, 'how common it is for new words to be written to any popular tune.' The Antiquarian Society of Newcastle some time ago offered a reward for a copy of the original song, but without a successful result" (Bruce & Stokoe, Northumbrian Minstrelsy).

A pair of pipers were hanged at Newcastle for daring to play this Jacobite mustering tune, and it is still a core part of the Northumbrian pipe repertory. Perhaps the oldest known version of the tune is in the manuscript of Henry Atkinson, dated 1694/95, under the title “The Flower of Yarraw.” Atkinson was a fiddler from Hartburn, Northumberland, in the North East of England (as evidenced by the bow markings in the manuscript, and the local place names). The title appears in Henry Robson's list of popular Northumbrian song and dance tunes ("The Northern Minstrel's Budget"), which he published c. 1800, and the tune appears in the c. 1812 music manuscript collection of Northumbrian musician John Bell (1783-1864) (as “Sir John Fenwicke”).

The “Long Cold Nights” title for the tune stems from a song printed by Playford in Apollo’s Banquet (1687), in Thompson’s Orpheus Caledonius (1725), and later expanded on in a broadside ballad (see C. M. Simpson’s The British Broadside Ballad and Its Music, No. 292, for more information). In fact, the tune was quite popular in the 18th and employed for several songs, including “Mary Scot” (published in Ramsay’s Poems, 1720). Dance versions of the melody were constructed as the strathspey “Carrick's Rant," which itself is a development of “Clurie's Reel,” printed in the Angus Cumming collection, according to Stenhouse, who also says that “the tune of Mary Scott was known at least a century before (either dance melodies) were even heard of.” “Sir John Fenwick…” appears in the music manuscript collections of Robert Eliot Bewick (Gateshead, 1835) and Joseph Crawhall (Northumberland, 1872).

Back to Sir John Fenwick