Find traditional instrumental music
This is the stable version, checked on 19 July 2021.
Jump to: navigation, search

Back to Tam's Grey Mare 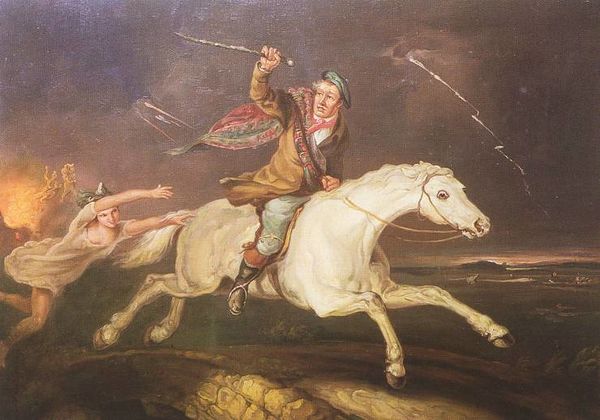 TAM'S GREY MARE. Scottish, Reel (whole time). E Dorian. Standard tuning (fiddle). AAB. "Tam's Grey Mare" was composed by Scottish fiddler-composer and bandleader Joseph Lowe. The title is a nod to Robert Burns' famous poem "Tam o'Shanter", in which Tam is possessed of a steed named Maggie, who is indeed a grey mare. Farmer Tam is drinking one night in a tavern in Ayr, whilst the weather worsens. As they head home they pass Alloway Kirk and happen upon a gathering of witches and warlocks, dancing, presided over by the Devil. Taken with the scene (and the witches, who have reduced to their shifts), the whisky-addled Tam cannot help but exclaim "Weel done, Cutty Sark!" to young Nannie, one of the dancers. He is undone and flees on Maggie, chased by the unholy group, and heads for the stream (which he knows no witch can cross), but as Maggie leaps for the safety of the far side:

For Nannie, far before the rest,
Hard upon noble Maggie prest,
And flew at Tam wi’ furious ettle;
But little wist she Maggie’s mettle –
Ae spring brought off her master hale,
But left behind her ain gray tail;
The carlin claught her by the rump,
And left poor Maggie scarce a stump.

See also the Lowe brothers' "Witches (2) (The)" and "Warlock's Strathspey," also inspired by the poem.

Back to Tam's Grey Mare