Find traditional instrumental music
This is the stable version, checked on 21 December 2020.
Jump to: navigation, search

Back to Three Coney Walk

X: 1 T:Three Coney walk, or.... PFD3.193 B:Playford, Dancing Master Vol 3, 2nd Ed, c1726 Z:vmp.Ruairidh Greig 2015 www.village-music-project.org.uk T:Number Three. PFD3.193 M:6/8 L:1/8 Q:1/4=100 K:D D>ED A2A|d>edc3|B>cB A>BA|G>AG F2G| ADD BDD|ADD BDD|ADD B>cd|E3DD2|| g>ag f>gf|e>fec2d|e>dc B>cd|B2A A2A| dAA eAA|fAA gAA|aAA gAA|"Da Capo"f>gfe3|] W:The first strain twice, and the last but once, then each strain once over again, then the first once again. W:Then the same all over again W:The first Man cast off, and turn the third Woman, and cast up into his own place again.| The W:first Woman cast off and turn the third Man:| And fall in the middle of the third Couple: And W:[?] first Man between the second Couple: Then take Hands and meet all six abreast and the first Man W:turns his Partner.| Then the first Man turns the third Woman with his Right-hand, and the Wo. W:turns the second Man at the same time; and then turn her Partner.| Then the first Man and W:Woman turn the other two, and turn his Partner, the first Couple cast up a top and Right-hands W:and left half round into the second Couples place.

THREE CONEY WALK. AKA - "Number Three." English, Jig (6/8 time). D Major. Standard tuning (fiddle). AABB. "Three Coney Walk; or, Number Three" was printed by London music publisher John Young in the Third Volume of the Dancing Master (2nd edition, c. 1726), along with directions for a country dance. It was also printed by rival London music publisher John Walsh in his Third Book of the Compleat Country Dancing-Master (editions of 1745 and 1754). London musician Thomas Hammersley entered it into his c. 1790 copybook as well. 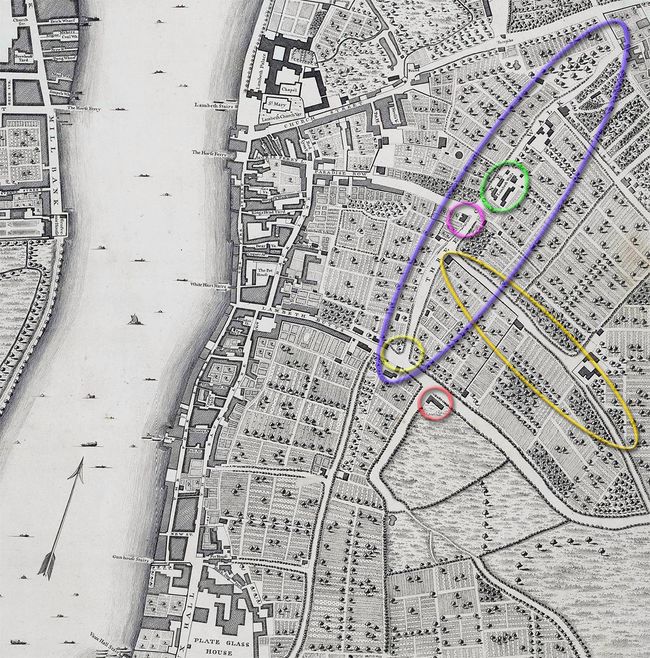 Three Coney Walk is circled in blue on John Rocque's map of 1746. Lambeth Wells is circled in green, and the Three Coneys and Feathers pub in purple.
Coney refers to a hare or rabbit; thus New York City's Coney Island was an island once known for its abundance of wild rabbits. However Three Coney Walk was a country lane in Lambeth (now south London), on which was situated Lambeth Wells, a place of mineral wells around which public entertainments grew up, with a "Great Room" for music and dancing that opened before 1697. Later Three Coney Walk became known as Lambeth Walk. This description is quoted from Louis Alexis Chamerovzow's The Embassy, or the key to a Mystery (1846), a novel, although the quotation is from the factual appendices which support the narrative:

The lane...was called Three Coney Lane, and derived its name from a small wayside Inn or Public Tap at the corner of Paradise Row, bearing the sign of the Three Conies and Feathers. Its limits were not much more extended in King Charles's time than they are a present, its easternmost boundary being the Marsh, and its westernmost an open Archery-ground called the Butts, on the site of which now stands the Workhouse. All around were green fields and lanes, and Nurseries, reaching all across the country to Newington and Kennington, both "famouse places;" whilst river-wards arose a multitude of small cottages and tenements in the midst of gardens, the whole forming the hamlet of Lambythe.

The Three Conies and Feathers was a small, low house, sunk some two or three feet below the level of the main road, and attained by two or three steps; having, moreover, a frontage of some three or four yards deep, taken up with tables and benches for the convenience of the traveller or the visiter. It is now called "The Feathers," and still occupies its ancient site; notwithstanding that the alterations and improvements have rendered it irrecognizable even as the "Three Conies and Feathers" of 1805.

Back to Three Coney Walk