Find traditional instrumental music
This is the stable version, checked on 4 November 2020.
Jump to: navigation, search

Back to Tom Bowling 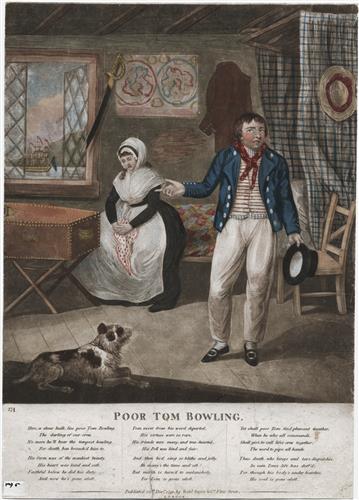 TOM BOWLING. English, Air (whole time). A song composed by Charles Dibdin (1745-1814), a very popular English musical dramatist of his era, in memory of his older brother Thomas Dibdin . Charles was the 18th son of a silver-maker, understandably driven to poverty, and Tom was some 29 years older and something of a father-figure to Charles. The elder brother had been an East India trade sea-captain, but was killed when his ship was struck by lightning (One of the verses of the song is engraved on Dibdin’s tombstone.). The song (also called “The Sailor’s Epitaph”) first appeared in The Oddities, performed at The Lyceum Theatre in 1789, and captures the noble spirit of the ‘Tar’. The words to the song begin:

Here, a sheer hulk, lies poor Tom Bowling,
The darling of the crew;
No more he’ll hear the tempest howling
For death has broach’d him to.
His form was of the maliest beauty,
His heart was kind and soft,
Faithful, below he did his duty,
But now he’s gone aloft.

Sir Henry Wood and his Sea Songs established “Tom Bowling” as a tradition of the Last Night of the Proms. Victorians found its elegiac content and superb melody immensely popular in the Victorian drawing-room repertoire of storytelling through song. It is well-recorded that the song was American transcendentalist Henry David Thoreau’s favorite song.

Back to Tom Bowling