Find traditional instrumental music
This is the stable version, checked on 9 October 2020.
Jump to: navigation, search

Back to Trip to Clumber 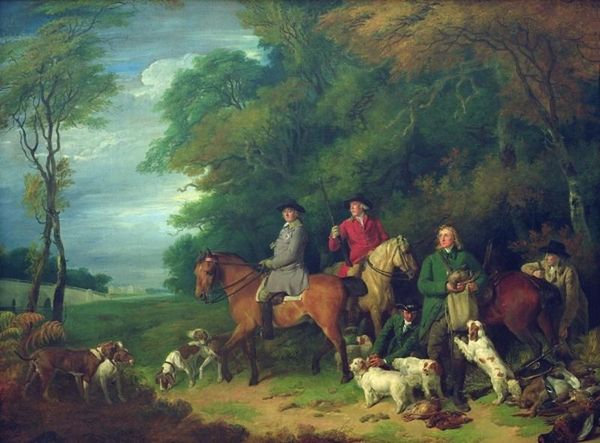 The Return from Shooting, Francis Wheatley (1747-1801). The 2nd Duke of Newcastle is depicted with his friend Colonel Litchfield and the Duke's gamekeeper, Mansell along with four Clumber Spaniels.
TRIP TO CLUMBER. Scottish, Country Dance Tune (2/4 time). F Major (Aird, McGlashan): D Major (Aird). Standard tuning (fiddle). AABB. The title may refer to a journey to Clumber House, Nottinghamshire, originally built sometime between in the early 1760's for the first Duke of Newcastle, and completed by the handsome Henry Fiennes-Clinton Pelham-Clinton, ninth Earl of Lincoln, who became second Duke of Newcastle under Lyme (1720-94) in 1768 (and who may have been a lover of Horace Wapole's while they were on their Grand Tour of the Continent). Garden buildings and a lake were added over the next twenty years. It was regarded as one of the finest non-Royal houses in the country. A classical building of white freestone (brought from the Duke's own quarry), flanked by a square wing at each corner, with the central portion, which faced the lake, containing a light Ionic colonnade. The core of the house was the original ducal hunting lodge which had previously existed on the site. The house severely damaged by several fires over the years and was finally demolished in 1938.

Back to Trip to Clumber