Back to Trip to Oatland

TRIP TO OATLANDS. AKA - "Trip to Oatland." Scottish, English; Jig (6/8 time). England, North‑West. F Major (Knowles): G Major (Howe): D Major (McGlashan). Standard tuning (fiddle). AABB. Oatlands is an area of greater Glasgow on the south of the River Clyde, part of the Gorbals historic area, notorious for its 20th century tenements. However, in this case the title may well refer to Oatlands in Surrey, a former Tudor and Stuart royal palace which took the place of the former manor of the village of Oatlands near Weybridge, Surrey. It remained in Royal hands as a country retreat and, later, a hunting lodge, until, by the latter 18th century it was occupied by Henry Pelham-Clinton, 2nd Duke of Newcastle, who laid out formal gardens. Considering that Alexander McGlashan published "Trip to Oatlands" around 1781, it may be that the tune title refers to an event in Clinton's tenure of the estate. 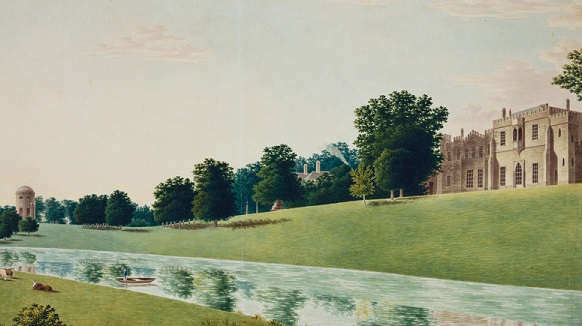 Oatlands House, seen from the direction of the River Thames.
In 1790 Oatlands was leased Duke and Duchess of York, Prince Frederick (1763-1827) and Princess Frederica Charlotte of Prussia (1767-1820); he was the second son of King George III, the "Grand Old Duke of York" (as the nursery rhyme goes) effectively in charge of the armed forces of Great Britain. A year later composer Joseph Haydn, having been invited by the Prince of Wales and his brother the Duke of York to play music for four hours each evening, recorded his impression of the estate:

The little castle, 18 miles from London, lies on a slope and commands the most glorious view. Among its many beauties is a most remarkable grotto which cost £25 000 sterling, and which was 11 years in the building. It is very large and contains many diversions, inter alia actual water that flows in from various sides, a beautiful English garden, various entrances and exits, besides a most charming bath.[1]

Around the turn of the 19th century, at the beginning of summer, 1799, the Duchess of York gave a grand Fete (i.e. Ball) at the newly renovated Oatlands, recorded by several period newspapers. The Times (June 1, 1799) reported:

In defiance of the rain, the Duchess of York's Fete at Oatlands on Thursday was splendid in the extreme. The Royal Family dined in the new apartment, called the Green Room, adjoining to which was the Ball Room; fronting the Thames on the lawn, six Marquees were erected, communicating to each other, where tables were spread for the Nobility. The dinner was served at three o'clock. On the table where the Royal Family were seated was a dish of green pease. During the Dinner, the Duke's band performed martial airs. After the Dessert, the company repaired to the Ball Room. Country Dances were led down by the Duke of Kent and Princess Augusta, to Scotch airs; and continued till eight in the evening; and at ten their Majesties and most of the company took leave of the Royal Highnesses.

It was perhaps an event such as this that inspired the title "Trip to Oatlands."


Back to Trip to Oatland