Back to Valse à Guilbeau

VALSE À GUILBEAU (Guilbeau's Waltz). Cajun, Waltz. USA, Louisiana. G Major. Standard tuning (fiddle). AB. This waltz was supposed to have been played by a condemned soldier to a general as a last request before his execution before a firing squad. "His handcuffs were removed and he sat on his coffin and played a song which Dennis (McGee) called 'Guilbeau's Waltz.'" Upon finishing the tune, the soldier asked the general to play for him, and the general complied with a tune called "Napoleon's Waltz." McGee believed the story to have happened during the Civil War. See also notes for "Camp Chase (2)," "Gilderoy (2)," "MacPherson's Lament//Farewell," and "Last of Callahan" for other, rather similar fiddler's execution tales. 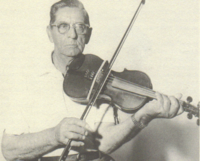 Back to Valse à Guilbeau