Back to Virginia Reel (1)

VIRGINIA REEL [1]. AKA - "Virginia Reel Part 1." AKA and see "Lord MacDonald (4)," "Leather Breeches," "Leather Britches." American (Scottish, originally), Reel. G Major. Standard tuning (fiddle). AABB. The tune is the Scottish "Lord MacDonald's Reel", a great favorite with fiddlers because of its rhythmic back and forth "sewing" motion when bowing the pattern between strings. The earliest publication of the tune with the "Virginia" title is on a single sheet (perhaps detached from a book) published by George P. Reed in Boston in 1812, where "Lord MacDonald's Reel" is given as an alternate title. 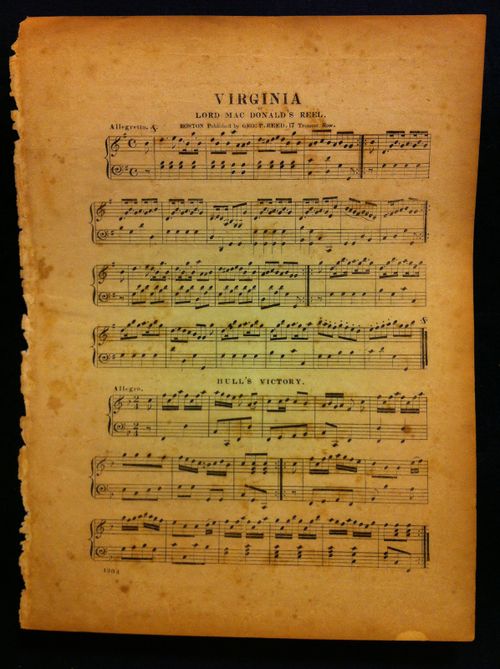 The name "Virginia Reel" is (in)famous as a "floating" title, applied to many and varied tunes that have been used as a vehicle for the dance. Some that have been called "Virginia Reel" include "Sir Roger de Coverly," "Miss McCloud's Reel," "Old Dan Tucker" and others (see Burchenal, 1918). Mark Twain wrote in a letter to the Virginia City Territorial Enterprise dated January, 1863, that: "We consider that any man who can fiddle all through one of those Virginia Reels without losing his grip, may be depended upon in any kind of musical emergency." The dance The Virginia Reel is derived from the English country dance "Sir Roger de Coverly."

Paul Tyler finds this vignette in W.H. Venable’s Footprints of the Pioneers of the Ohio Valley: A Centennial Sketch (1888):

The old-time apple-cutting was an occasion of unbounded mirth. . . . After the apples were cut, and the cider boiled, the floor was cleared for a "frolic," technically so-called, and merry were the dancers and loud the songs with which our fathers and mothers regaled the flying hours. The fiddler was a man of importance, and when, after midnight, he called the "Virginia Reel," such shouting, such laughter, such clatter of hilarious feet upon the sanded puncheon floor, startled the screech-owl out of doors, and waked the baby from its sweet slumber in the sugar-trough. . . . The apple-cutting was fifty years ago...

There are many variants throughout North America, often quite idiosyncratic. An early recorded version of "Lord MacDonald" under the title "Virginia Reel Part 1" (1923) was made by fiddler Arthur-Joseph ("A.J.") Boulay in Montreal in 1923, issued on Victor records. It is slightly "crooked", having irregular measures, but is immediately recognizable. Boulay's version has an American title, but there are several other French-Canadian versions under a variety of titles that are similar to Boulay's. See Isidore Soucy's "Reel d'Hochelaga," "Gigue à Ti-Zoune" and others.

Back to Virginia Reel (1)