Find traditional instrumental music
This is the stable version, checked on 30 October 2019.
Jump to: navigation, search

Back to Washington's March (3)

WASHINGTON’S MARCH [3]. American, Reel (cut time). USA, West Virginia. D Major. DDad tuning (fiddle). AB. Despite the title, the tune is played in reel tempo. May possibly be a very distant derivative of “Washington’s Grand March,” although there were many melodies in America that carried the Washington name, an indication of his influence even in backwoods areas. Betty Vornbrock notices a similarity in the high part of Edden Hammons’ [1] version and the ‘B’ part of the Shetland tune “Sleep Soond i’da Moarnin’”. Allan Jabbour (in 1984 notes to Edden Hammons recording) says that this is one of the tunes in the Hammons family repertoire that has special family associations, in that it was considered to have been composed by early family members, “or at least uniquely preserved by them.” The original 1947 field recorder, a folklorist named Louis Watson Chappell, stated that Edden Hammons [2] won the 1939 Greenbrier Valley fiddle championship playing “Washington’s March,” and the he had learned it “59 years ago and first played it on a gourd covered by a deer skin” (quoted by Jabbour). Randolph County, West Virginia, fiddler Woody Simmons (b. 1911) remarked in a 1979 interview for Goldenseal Magazine: 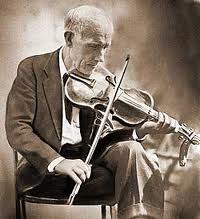 The melody was also played in this tuning by eastern Kentucky fiddler Ed Haley.

Back to Washington's March (3)