Back to Wast Side Trows' Reel[edit]

WAST SIDE TROWS’ REEL. Shetland, Reel. D Major. Standard tuning (fiddle). AABB. Anderson & Georgeson (1970) relate the following story: Early in the 19th century one Hakki Johnson lived at Tumlin, Aithsting, Shetland, who was reputed to have been an excellent fiddler “but rather weak minded when the moon was full. His neighbours said he was ‘No aa dere.’ One winter night he called on a neighbouring fiddler and played a weird tune, asking when he had finished, ‘Kens du yon ton?’ On getting a negative reply he told the following story: ‘Twa nights ago I was playing at yon rant at Aith an left for hame some time efter tree in da moarnin. When I was below da Broch a Houlland I tocht I heard a fiddle playin. I stopped and listened and heard da reel going on for some time. When it stopped I gied on my way. Yon was hit I played een noo’”. 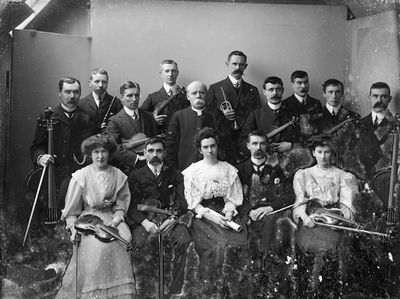 The Lerwick String Band c. 1906. Andrew Abernethy is standing at extreme left, and was the photopgragher. [Shetland Museum and Archives]

Back to Wast Side Trows' Reel[edit]