William Shepherd's Lamentation for the Death of Sir Ralph Abercromby

WILLIAM SHEPHERD'S LAMENTATION FOR THE DEATH OF SIR RALPH ABERCROMBY. Scottish, Slow Air (6/8 time). G Minor. Standard tuning (fiddle). AABB. The melody was composed and published by William Shepherd, a musician of Edinburgh who was a business partner of Nathaniel Gow for many years. Shepherd's collection appeared sometime between 1801 and 1806. John Glen (1895) says of his work, "It must be admitted that in some of his tunes there is a want of originality, while others show considerable evidence and taste in their composition." 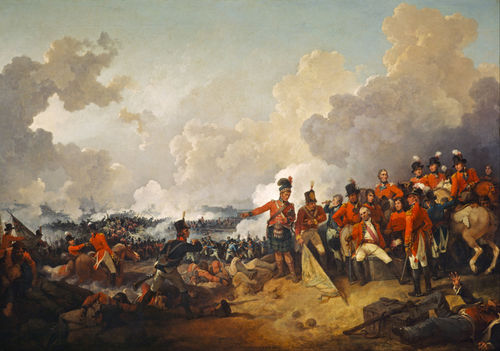 Ambercromby lies wounded at the Battle of Alexandria. Perhaps the depicted presentation of the captured 21st DB Legere standard by a 42nd Highlander and unknown soldier was supposed to be consolation for the mortal wound.

Sir Ralph Abercromby [1] (1734-1801) was a very capable Scottish soldier and politician who served as a commander of British army forces in various theaters, rising to the rank of Lieutenant-General. He served ably as Commander-in-Chief in Ireland in the years just prior to the rebellion of 1798, and in several engagements during the wars with France and Napoleon. He met his demise in the Battle of Alexandria (1801) where he was mortally wounded, and succombed seven days later.