Find traditional instrumental music
This is the stable version, checked on 15 May 2020.
Jump to: navigation, search

WOODCHOPPER’S REEL, THE. AKA - "Wood Chopper's Breakdown," "Woodchopper's Breakdown." AKA and see "Pea Soup" (or “Reel de la soupe aux pois,” a French Canadian title), "Reel des bûcherons," "Lumberjack (3)," "The Woodchopper," “Woodchopper’s Breakdown (2),", "Woodchopper's Hornpipe.” Canadian (originally), American; Reel. USA, New England, Missouri. Canada; Maritimes, Prince Edward Island. D Major. Standard tuning (fiddle). AABB. This classic mid-20th century reel is the composition of New Brunswick fiddler Ned Landry, born in St. John in Feb., 1921, who also composed "Hillbilly Calypso," "Ontario Swing" and "Bowing the Strings." Landry appeared on Don Messer's radio show Backwoods Breakdown in 1934 as a harmonica player, and soon formed his own group, the New Brunswick Lumberjacks, whose recordings begin in 1955. French-Canadian titles for the tune include “Reel de la soupe aux pois” (Pea Soup), the title in Montréal, and “Reel des bûcherons” (Lumberjack’s Reel) or "Petit Bucheux (Le)" (Little Woodchopper). Messer recorded the tune on 78 RPM in 1952 (Apex 26322) under the the title "Pea Soup", and it was included in his tune book Way Down East (1948), although under the title "Woodchopper's Reel." Messer's sound recording was predated by fiddler Isidore Soucy's (1899-1962) July, 1951, recording, where it is called "Reel de la soupe aux pois" (Pea Soup Reel). Why Messer chose to call in "Pea Soup" on his recording (in imitation of, or competition with Soucy?), and not "Woodchoppers" is not known, although later Messer recordings of the tune were under the "Woodchoppers" title. Landry himself recorded the tune for RCA Victor in 1950, issued on their Bluebird Series 55-3249-B (78 RPM) as "Wood Chopper's Breakdown." It may be that Messer did not have the tune from Landry, and instead learned it from La Family Soucy's recording, only later realizing it was Landry's composition "Wood Chopper's Breakdown."

The reel has become popular in the American Mid-West, probably picked up from Canadian radio broadcasts. It was, for example, in the repertoire of Nebraska fiddler Bob Walters and his protege Cyril Stinnett (1912 1986), who epitomized the "North Missouri Hornpipe Style" of fiddling (see abc below. Stinnet has the parts reversed from the original). “We’re very suspicious that this tune may be French-Canadian,” wrote John Hartford in 2001. The melody is sometimes attributed to Maritime fiddling great Don Messer (as, for example, on his MCA album “The Very Best of…”), however, this seems to have been an attempt by the record company to establish a copyright claim. 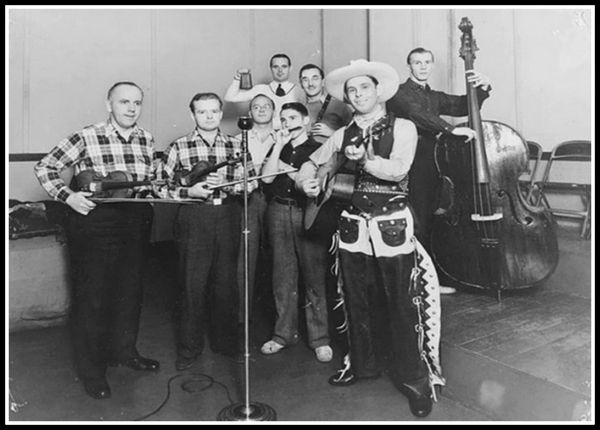