Find traditional instrumental music
This is the stable version, checked on 14 July 2019.
Jump to: navigation, search

Back to Woodland Flowers (1) 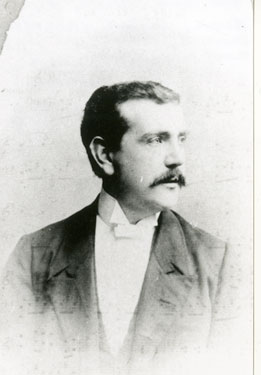 Felix Burns
Despite its being sometimes transcribed in 6/8 jig-time, the melody was composed as a schottische by Felix Burns [1] (1864-1920). Burns was born in Perth, Scotland, in 1864. A musical prodigy and multi-instrumentalist, his first musical instruments were tin whistle and mouth organ, “graduating” to piano, organ and various brass instruments. His composing career started at an early age and he went on to become one of the most popular composers of his time, although for an unknown reason he often credited his compositions to various pen names such as Leona Lacoste, Alfred Rosslyn, Claud Roslind, and Leon Fabrini. He settled in Carlisle, and died 1920, although not before siring thirteen children and composing 120 pieces, of which "Woodland Flowers" is said to have been his personal favorite. Burns’ work was much recorded in the early decades of the 20th century by such musicians as Scotland’s Wyper Brothers. Later, Scottish band leader Jimmy Shand recorded “Woodland Flowers.”

In Ireland, a version of "Woodland Flowers" is played as a barn dance under the title “Mrs. Kenny's Barn Dance.” Paul de Grae finds a version as an untitled barndance (although, oddly, noted in 6/8 time) in Feldman & O’Doherty’s The Northern Fiddler (1976, p. 110), collected from Donegal fiddler Simon Doherty.

Back to Woodland Flowers (1)