Back to Yankee Doodle Dandy 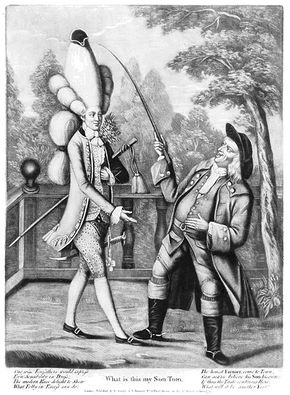 ...and called it Macaroni
YANKEE DOODLE DANDY. AKA – "Yankee Doodle." English (originally), American; Country Dance Tune (2/4 time) or March. D Major (most versions): G Major (Linscott): C Major (Kerr): A Major (Buckley). Standard tuning (fiddle). AB (Bayard, Johnson, Linscott): AAB (Kerr): AABB (Johnson, Kidson, Mackintosh, Raven, Sweet): AABBA'A'B'B' (Kennedy). There is some mystery and controversy about the exact origins of one of the most famous tunes in American tradition, "Yankee Doodle" [1]. Elson (The National Music of America, 1899) finds that the first part of the melody was once quite familiar to Dutch musicians and “has been used in Holland from time immemorial as a children’s song,” however, the second part was not known. The Irish musicologist Flood (1906) maintains "Yankee Doodle" derives from a Jacobite era (early 18th century) song called "All the Way to Galway (1)." Claims have also been made for Spanish and even Hungarian musical origins. The earliest appearance of the complete melody was claimed by Dr. Rimbault (1876) to have been a printing in Walsh's Collection of Dances for the year 1750 where it he said it appears as "Fisher's Jig" (a reference to the ‘notorious lady’, Kitty Fisher, who died in 1771). Rimbault later wrote that it was a country dance found under the title “Kitty Fisher's Jig,” written in triple time, but that it was afterwards altered to common time, although the title remained the same (he printed what he said was the Walsh tune in the magazine Leisure Hour, see abc below). The problem is that no one has been able to locate the melody in either Walsh’s publication or in any of Thompson’s Country Dance Books of the same era. “Kitty Fisher” does exist in Thompson and Son’s Twenty-four Country Dances for 1760 but it is a different, duple-time tune, unlike anything resembling what we know as “Yankee Doodle.” A nursery rhyme exists that goes:

Lucy Locket lost her pocket,
Kitty Fisher found it,
Not a bit of money in it,
Only binding round it.

This contains Fischer’s name (misspelled, while Lucy Locket was presumably a name taken from a character in The Beggars Opera of 1727) and scans to the “Yankee Doodle” tune, but any direct relationship remains speculative.

If one discounts Rimbault’s claims, it was once thought that the earliest corroborated printed appearance of the “Yankee Doodle” tune was in James Aird’s Selection of Scotch, English, Irish and Foreign Airs, vol. 1 (1782, sometimes dated 1775–76), and George Colman’s opera Two to One (1784) as a song entitled “Adzooks, Old Crusty, Why so Rusty?” The tune's mocking connotations with at least a portion of the American colonial population were apparently well-established somewhat before that time. In fact, the tune paired with the "Yankee Doodle" title had been in circulation for some time in America. It was entered into the c. 1730 music manuscript copybook of the Rev. James Pike, a clergyman in Somersworth, New Hampshire, on a page with the "Freemason's March." J.A. Leo Lemay's researches ["The American Origins of 'Yankee Doodle'." William and Mary Quarterly, 33 (July 1976): 435–64] have uncovered that a comic ballad opera (and the first American play) by Andrew Barton, called The Disappointment; or, The Force of Credulity, was the first time the tune appeared in print (in New York and Philadelphia in April, 1767). "Yankee Doodle" appears as Air IV in Act 1, scene iii, sung by "brother Racoon," a dupe on his way to excavate for buried treasure. Unfortunately, Barton's satire proved a bit too biting—at least for Philadelphia, where it was thought that references to the Freemasons and some powerful personages brought too much risk on the production's sponsors—and the performance was cancelled.

Regarding the lyrics, there is little hard evidence for the derivation of the word Yankee, although it was in use as a term to identify New Englanders since the early 18th century. Doodle, on the other hand, has been traced to the Lancashire dialect, and means a trifler or shiftless individual. Of the song itself, Winstock (1970) writes "It is generally accepted that the words were written by (the Englishman) Dr. Richard Shuckburgh around 1755 in derision of the odd looking colonials who had come to help the British regulars fight the French, and the redcoats continued to use it in contempt...”. Elson (The National Music of America, 1899) traces this claim to an early 19th century publication called Farmer & Moore’s Monthly Literary Journal, although there are other, separate attributions to Shuckburgh (whose name is spelled various ways). The good and witty doctor did not live to see his satire used in the war of rebellion for he died in August, 1773, the New York Gazetter reporting: “Died, at Schenectady, last Monday, Dr. Richard Shuckburgh, a gentleman of a very genteel family, and of infinite jest and humour.” In October, 1768, the New York Journal gave the earliest notice of its performance:

The British fleet was bro’t to anchor near Castle William, in Boston Harbor, and the opinion of the visitors to the ships was that the ‘Yankey Doodle Song’ was the capital piece in the band of their musicians.

Boorish British officers called for dancing after a concert in Boston on January 25, 1769, that had been performed by a group led by musician Stephen Deblois. "Yankee Doodle" was one of the tunes (along with "Wild Irishman") the Redcoats derisively demanded, according to a newspaper account of the time, and when Deblois was not forthcoming, the British rioted. Deblois cancelled further concerts, and did not reinstate them until the English general in command pledged his officers' good behavior. By 1775 the piece was played by British fifers and drummers as a way to taunt the colonial populace as, for example, they did that year when one "John Andrews complained of the field music of the (British) 4th Regiment playing that melody near a church during religious services to annoy the congregation" (Camus, 1976). Culprits were drummed out to the sound of the tune from British camps in the city of Boston.

“Yankee Doodle’s” rapid transformation from a vehicle of derision to a famed national tune occurred at the very onset of the Revolutionary War with the attack on Lexington and Concord by forces belonging to Colonel Smith and Major Pitcairn. “In 1775 the British troops who attacked Concord and Lexington needed rescuing by Lord Percy's troops. As Percy marched through Roxbury with his band jeeringly playing "Yankee Doodle," he good naturedly asked a young American what there was to laugh about. ‘To think that soon you will dance to 'Chevy Chase'’, answered the boy, referring to the very old ballad about Otterbourne where Percy's great ancestor was defeated and captured" (Winstock, 1970; p. 70). The British were indeed chased back to Boston with a one-sided loss of life, harassed much of the way by the ‘minutemen.’ The Americans immediately appropriated the tune, which for a long time after was called “The Lexington March.” The melody appears in the manuscript collection of young Connecticut fifer Giles Gibbs (1760–1780), who perished in the war, under the curious title “Thehos Gendar.” “Yankee Doodle” was played by both sides in the Battle of Bunker Hill, and thereafter continued to be performed by musicians in the American army as well as the British. It appears in the manuscript collection, for example, of Captain George Bush (1753?–1797), an officer in the Continental Army and a fiddler by avocation. Under the terms of the surrender agreement at Yorktown in 1782 the British were specifically prohibited from playing the tune. So powerful was the metaphor, that when they turned insultingly away from the Colonials to present themselves to the French forces as they piled their arms on the ground, Lafayette instructed the French bands to play it in solidarity with the Americans. The march was also entered into the c. 1776–1778 music copybook of fifer Thomas Nixon Jr. [2] (1762–1842), of Framingham, Connecticut. Nixon was a thirteen-year-old who accompanied his father to the battles of Lexington and Concord, and who served in the Continental army in engagements in and around New York until 1780, after which he returned home to build a house in Framingham. The copybook appears to have started by another musician, Joseph Long, and to have come into Nixon’s possession.

Morrison (1976) states the air had a number of dance figures associated with it in Colonial times, and gives two examples. Johnson (1988) prints two contra dances to the tune.

“Yankee Doodle” returned to Europe as an American anthem some years later. Elson (1899) relates that, in 1814, near the conclusion of the War of 1812, the American statesmen Henry Clay and John Quincy Adams met the British ambassador at Ghent to arrange the final points and to sign the treaty of peace between Great Britain and America. The burghers were proud their city was the site for so momentous an occasion and proposed a serenade to the two embassies. They knew the English tunes well enough, but were perplexed as to the American national anthem. The bandmaster was sent to Clay to inquire, and was told that, of course, America’s chief melody was “Yankee Doodle.” The musician begged Clay to hum it to him, that he might write it down. Clay attempted to do this but failed, as did the secretary of the legation. Attention then turned to Clay’s African-American body-servant, called Bob, who was requested to whistle the tune. Bob complied, the bandmaster copied and harmonized, and the tune was heard in the serenade as planned.

Stories involving tin-ears, “Yankee Doodle” and American leaders do not end with Clay. A famous story about General Ulysses Grant and his ‘tin-ear’ has it that in order to perform his martial duty the famous Union Army warrior required a horse that could distinguish and respond to bugle commands, for Grant himself acknowledged that he himself knew but two tunes—one was “Yankee Doodle”—and other wasn’t. Another Civil War anecdote is contained in historian Stephen Sears volume To the Gates of Richmond, about the Lower Peninsula campaign of 1862. An incident occurred during the Battle of Williamsburg:

[Federal] Corps commander [Samuel] Heintzelman joined the desperate struggle to close the broken ranks. He hit on the novel idea of rallying them with music. Finding several regimental bands standing by bewildered as the battle closed in, Heintzelman ordered them to take up their instruments. "Play! Play! It's all you're good for," he shouted. "Play, damn it! Play some marching tune! Play 'Yankee Doodle,' or any doodle you can think of, only play something!" Before long, over the roar of the guns, came the incongruous sound of "Yankee Doodle" and then "Three Cheers for the Red, White, and Blue." One of [General Joseph] Hooker's men thought the music was worth a thousand men. "It saved the battle," he wrote.

It is surprising to note that "Yankee Doodle" was used, along with "Edie Sammon's Tune," as part of the music for the ritual horn dance at Abbots Bromley, Staffordshire, England in late Victorian times (see "Edie Sammon's Tune"); the playing of "Yankee Doodle" thus emphasized the whimsical nature of the dance (which features, along with the horn dancers, the characters of the hobby horse, Robin Hood, the Maid and the Fool), which is performed with such dusky solemnity at modern ‘Revels’ stage productions in America. The title appears in a list of tunes in his repertoire brought by Philip Goodman, the last professional and traditional piper in Farney, Louth, to the Feis Ceoil in Belfast in 1898 (Breathnach, 1997). While mostly traditional Irish in his repertoire, Goodman regularly played several novelty or ‘popular’ tunes (he also played “Dixie,” calling it “Dicksie’s Land,” and thus covered all bases for Irish veterans of both sides of the Civil War). Recorded by Alabama fiddler Dr. D. Dix Hollis (1961–1927) for the Silvertone (Sears) label, 1924.

Back to Yankee Doodle Dandy