Back to Yester House

YESTER HOUSE. Scottish (originally), Canadian; Strathspey (whole time). Canada, Cape Breton. A Mixolydian. Standard tuning (fiddle). AAB (Lowe): AABB (Gunn, MacDonald, Stewart-Robertson). Composition of the melody was claimed by Niel Gow (1727-1807), or on his behalf by his son Nathaniel, although it had been previously published by another composer, according to John Glen (1895). The composer Glen refers to is probably Malcolm MacDonald of Dunkeld, who published the tune in his 3rd Collection (c. 1792), dedicated to Miss Drummond of Perth (for whom see "Miss Sarah Drummond of Perth (1)"). 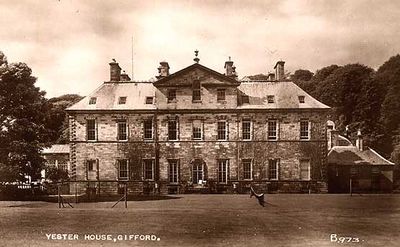 Yester House in an old photograph.

Yester House is located in East Lothian, Scotland, a mile from the village of Gifford, and was built on the site of a previous 16th century tower house (itself a replacement for the original 13th century Yester Castle, one mile away). The country house was built by the architect James Smith (1645 - 1731) for John Hay, 2nd Marquess of Tweeddale (1645 – 1713). Work on the residence was begun in 1697 but progress was slow and the house was not completed for more than 20 years. In 1729 the 4th Marquess retained William Adam (1689 - 1748) to redo the interior along with some additional changes, and when completed The Saloon was described by painter Gavin Hamilton (1723-98) as "the finest room at least in Scotland". Another of the designing family, Robert Adam, was commissioned to restyle the exterior in 1789, although only one side was completed before he died in 1792. Further changes were made in the 19th century, including the demolishing of the original nearby village of Gifford to help dignify the surroundings of Yester House (although it was rebuilt on one side of the avenue that led to the house). In 1972 the estate was purchased by Gian Carlo Menotti, the Italian operatic composer, and most recently, by pop star Lady Gaga. Burt Feintuch (2004) notes the tune has long been played in the Mabou, Cape Breton, area.

Back to Yester House