Find traditional instrumental music
This is the stable version, checked on 24 January 2021.
Jump to: navigation, search

Back to Yew Piney Mountain

YEW PINEY MOUNTAIN. American, Reel (irregular measures). USA, central West Virginia. A Mixolydian/Dorian. AEae (Burl Hammons) or DGdg (Harvey Sampson) tunings (fiddle). AAB (Krassen, Phillips): AA'B (Reiner & Anick). "Yew Piney Mountain," an archaic sounding, slightly irregular ('crooked'), modal melody (that fluctuates between dorian and mixolydian modes, or is in mixed mode, depending on the player), was in the repertoire of several older central West Virginia fiddlers. It appears to be related to the breakdown "Old Time Blackberry Blossom" or "Garfield's Blackberry Blossom" (John Hartford calls it a "cousin to..."). Wilson Douglas, a Clay County, West Virginia, fiddler who learned the tune from his mentor French Carpenter, said it took him "five long years" to master his version of "Yew Piney Mountain" (although he also said this of "Walking in the Parlor"). "Well, that's the meanest one in the bunch! That's a good tune, a hard tune to play. You mostly played it by yourself. Carpenter played it all the time" (from an interview with Nancy McClellan). French Carpenter himself said he had the melody from one "old Uncle John Smacawayne, he's been dead for several years, and he had winned many a contest, and this is the tune I learned from him when I was a boy." Douglas maintains it was among the first tunes composed in the jack pines of the mountains of West Virginia and believed 'old Jack McElwain' (Carpenter's "Smacawayne"), composed the tune. He thought McElwain to have been a Civil War veteran. Although he was too young to have heard McElwain play, Wilson's father did, and “Uncle Jack” is remembered in the community as a top fiddler, on a par with French Carpenter's famous grandfather, Saul Carpenter. The legendary McElwain was in reality Lewis Johnson “Uncle” Jack McElwain (1856-1938) of White Oak (a tributary of Laurel Creek, near the village of Erbacon, Webster County, West Virginia), and, while he was too young to have been a Civil War veteran, he did grow up in the post-Civil War era and became an extremely influential fiddler in central West Virginia. 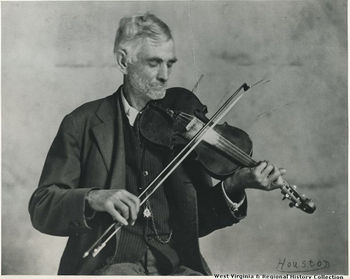 Another fiddler who learned “Yew Piney Mountian” in a unique way from McElwain was Dewey Hamrick. It seems that Hamrick’s father, who did not fiddle, walked forty miles to and from McElwain’s house to hear him play, and remembered and whistled the tunes when he got home for Hamrick to learn.

Back to Yew Piney Mountain