Find traditional instrumental music
This is the stable version, checked on 23 April 2022.
Jump to: navigation, search

BLACK JOKE [1]. AKA and see "Black Joker," "Black Jack (1)," "Black Jake (1)," "Black Jock (1)," "Black Joak (The)," "But the House and Ben the House" (Shetland), "Coal-Black Joak," "Scottish Lovers (The)," "Sprig of Shillelah (1)." English, Scottish, Irish, Shetlands; Country Dance, Jig and Morris Dance Tune (6/8 time). England; Northumberland, Yorkshire. G Major (Aird, Bacon, Carlin, Cooke, Mallinson, O'Farrell, Raven, Sumner, Thompson, Vickers): A Major (Bacon, Gow, Merryweather & Seattle, O'Flannagan). Standard or AEae (McLean) tunings (fiddle). AB (Bacon {Stanton Harcourt}, Gow, Thompson): AAB {x6} (Aird, Bacon {Ilmington}, Carlin, Cooke (two versions), Mallinson {Adderbury version}): AABB {x4} (Hall & Stafford, Mallinson {Bledington version}, Merryweather & Seattle, Raven, Sumner, Vickers): AABBCCDDEE (O'Farrell). "The Black Joke" was a widely popular street song in England in the early 1700's. That it was extremely vulgar and bawdy probably in no small way contributed to its continued popularity into the 19th century in that country and its colonies (including America). Irregular in form in many versions, its opening phrase has six measures, while the second has ten. There is a suggestion, however, that the tune began in Dublin as the vehicle for a ballad opera. According to Dennant (2013), it was published on a song-sheet c. 1720 with the title "The Original Black Joke Sent from Dublin," and subsequently was included as "Coal-Black Joak" in the popular and successful The Beggar's Wedding: A New Opera, as it is acted at the Theatre in Dublin with Great Applause: and at the Theatre in the Hay-market (1729). "The Black Joke" was heard in London as early as 1734 in Henry Carey's burlesque stage piece Chrononhotonthologos where it was called "that lowbrow little tune that has been used as an interval tune for years," referring to the music for dances performed in the entr'acte interval at the playhouses. The tune was used as a vehicle for songs in numerous period ballad operas, including The Fashionable Lady; or, Harlequin's Opera (1730), The Lottery (1732), The Generous Freemason; or, The Constant Lady (1731), Achilles (1733), Don Quixote in England (1734) and The Whim;, or, The Miser's Retreat (1734).

Early English printed collections (from London publishers) that contain the tune are Walsh's (Third Collection of Lancashire Jiggs, Hornpipes, Joaks, etc., c. 1730), Walsh's Twenty Four Dances for the Year 1730, Johnson's Wrights Compleat Collection of Celebrated Country Dances, vol. 1 (London, c. 1742) and Charles and Samuel Thompson's 200 Country Dances volume II (1765). John Kirkpatrick (1976) dates the tune to 1715 without citing his source. Its popularity may have been cemented by its inclusion in the first volume of Allan Ramsay's popular Tea-Table Miscellany (London, 1730), where it is the indicated tune for "A new song, to the tune of Black Joak, the Joak the words by the R___d Mr. S___th, Chaplain to a Man-of-War."

It is played today as the tune for the Lichfield Morris Dance called The Barefooted Quaker, and for dances from other morris traditions. Mallinson's morris dance tune versions, for example, are from the Adderbury and Bledington areas of England's Cotswolds, while Bacon's are from the Adderbury, Ascot-under-Wychwood, Bledington, Ilmington, and Stanton Harcourt. A version of the tune from Badby, Northhamptonshire, is known as "Old Black Joe (1)," and lacks the distinctive two measure ending to both parts typical of most "Black Joke" versions. John Kirkpatrick (1976) is of the opinion that the Badby dance "flows more perfectly than any in the Cotswold Morris. No jumps, no jerky backwards movements, no need to fiddle the feet to get them right. An absolute joy." The tune collected with the dance in Bucknell (under the title "Old Black Joe") is perhaps nearest the original.

The tune is known as "But the House and Ben the House" in Shetland, and Cooke says some informants gave the first lines as:

But your house and ben your house
This house is like a bridal house.

The tune played by his source from the islands was the one commonly known throughout Britain and Ireland during the 18th century as "The Black Joke" (or Jock). A variety of songs were set to it, all of them bawdy and all concerned with sexual intercourse, usually with the burder "Her black joke and belly so white" (where the 'black joke' refers to female genitilia. "Some of the texts are the creations of music-hall hacks, such as the earliest published verses, entitled 'The Original black Joke, Sent from Dublin', which begin: 'No mortal sure can blame ye man/Who prompted by nature will act as he can'...(song sheet, c. 1720 Mitchell Library, Glasgow). Simple and more direct 'folk' versions were well-known in Scotland. The poet Robert Burns wrote a parody beginning 'My girl she's airy...'" (Cooke, 1986). The lyrics appearing below are taken from Andrew Crawford's 1826–28 Collection of Ballads and Songs:

Say's he thay wa'd need to hae something to spare
That meddle wi you or your wee pickle hair. ... (Cooke)

Cooke's informant, John Irvine, played it as a middle tune between two reels for the ceremony of the "bedding of the bride" around the turn of the century. This ceremony, in which the women of the community escorted the bride to her bed, was performed to fiddle music. "The use of the 'Black Joke' in this context is intriguing, Robert Irvine's knowledge of part of the chorus suggests that in earlier days the whole song might have been known and, unless the fiddler was having his own private joke by playing this piece, possibly even sung by the bride's attendants. Genuine bawdry is often found in such situations elsewhere in the world. According to Legman (1964), 'the purpose of such songs...was and is evidently apotropaic, being intended to ward off the evil eye...dangerously present at all moments of happiness, or of success and victory' (The Horn Book, 1964, p. 388). It is likely, too, that such humour served to release anxiety on the part of the young initiate. Finally, if the text were anything like the Crawfurd text, the explicit detail could have served also as a piece of last-minute sex education--an example of how music is sometimes used in a situation that allows one to sing what might be too embarrassing to say" (Cooke, 1986). 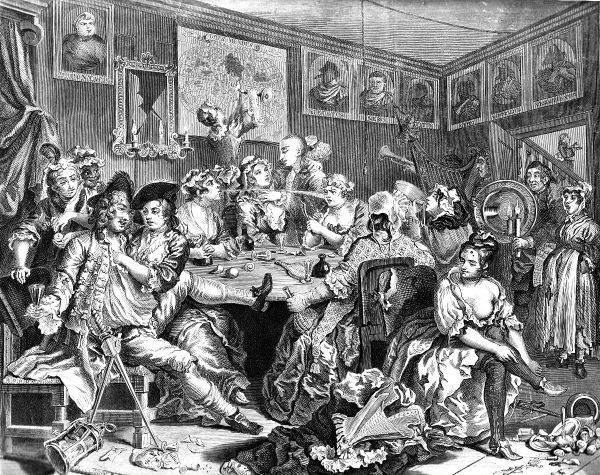 "Black Joke" was popular enough by the mid-1730's to have been alluded to in satirical artist William Hogarth's series of engravings called The Rake's Progress, which depicts the descent into dissolution of a member of the new 'gentleman' class. In plate 3, "The Tavern Scene," the protagonist "T. Rakewell" is pictured among prostitutes in a Drury Lane tavern. David Dabydeen comments on the artwork for the BBC series "The Black Figure in 18th-century Art" [1]:

A black prostitute (on the far left of the picture) is part of the general debauchery. She laughs in enjoyment of the vulgar antics of her fellow prostitutes. There is a suggestion of obscenity in the way she places her finger to her mouth. A sexual pun is involved, for her laughter evokes the term 'black joke' - 18th century slang for the female sexual organs and also the title of a famous obscene song. In case the pun is missed, Hogarth has the black prostitute looking in the direction of a pregnant ballad seller who enters the room with a copy of 'The Black Joke'.

The Scotch versions are based on an English tune that was known as "Black Jock (1)" in Scotland from about 1735 (Johnson). It was often played in Scotland in scordatura tuning (AEae), as directed, for example, in James Gillespie's A Collection of the Best and Most Favourite Tunes for the Violin (Perth, 1768). James Oswald printed a "Burlesque on Black Joak" in his Caledonian Pocket Companion (Book 7, c. 1756), and, a year later set it in 3/4 time (as "Black Jock") in his Collection of Scots Tunes (1757). Johnson thinks the name was changed either on purpose, to 'Scottisize' it (it was known as "Black Jack" in Northumberland), or to distance it from the extremely obscene lyrics. If the latter, the distancing was largely hypocriphal, for the lyrics were well-known throughout the country. The Scots poet Robert Burns (who was no stranger to ribaldry) penned to the melody, in September, 1784, the words "My girl she's airy, she's buxom and gay," one of his earliest bawdy songs:

Her slender neck, her handsome waist,
Her hair well buckl'd, her stays well lad'd,
Her taper white leg with an et, and a, c,
For her a,b,e,d, and her c,u,n,t,
And Oh, for the joys of a long winter night!!!

The tune appears in Scottish musician and dancing master David Young's McFarlane Manuscript (1740) in a long variation set (18 strains) by Charles McLean, in Bremner's Scots Tunes (1759) in 30 strains, the Gillespie Manuscript (1768), the Sharpe Manuscript (c. 1790) with 18 strains, and a flute MS. of c. 1770; all have basically the same variations, though in different order.

In Ireland, Flood (1906) reports that the famous rope dancer Madame Violante set off a furor in Dublin's Smock-Alley Theatre in December, 1729, when Cummins danced the "White Joke," a set off to the then-popular "Black Joke." In fact, there soon appeared a number of 'Joke' tunes in country dance collections such as Walsh's, of all the colors of the rainbow.

American audiences heard the melody as the tune for air 13 in Andrew Barten's ballad opera The Disappointment (New York, 1767). A New York City fire company, Volunteer Engine Company No. Thirty Three was popularly known as the Black Joke in the mid-18th century. In light of the bawdy words, a connection undoubtedly not lost on the immigrant Irishmen who made up the bulk of the company, men running around with hoses clutched in their hands probably well-enjoyed the in-joke being called the Black Joke. It is interesting to note that many early New York fire companies were filled with brawlers, and held allegiances to various urban gangs and politicians. The Black Joke, in fact, were in the forefront on some of the notorious New York City draft riots during the Civil War. After one of the company's leaders had been picked in the draft lottery the firemen, at the head of a mob, rushed the lottery headquarters, scattered the policemen and soldiers guarding the lottery wheel, and destroyed it (Herbert Asbury, The Gangs of New York, 1927). 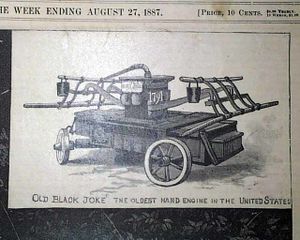 FRANK LESLIE'S ILLUSTRATED, New York, Aug. 27, 1887 The front page has a print of: "Old Back Joke--The Oldest Hand Engine in the United States"

I have spoken of friendly companies. There were others that were not friends and were continually fighting. Dreadful battles were common, growing out of races and general rivalry. Sometimes there would be two or three hundred men and boys pulling an engine, and a race at such a time was very exciting, even without a fight. Of course, the boys took up these affairs in their smaller way, and fought on every occasion. It was not safe for a boy who ran with 25 to be seen near 24th Street and 8th Ave., for instance, where Mazeppa Engine No. 48 lay, or near 58th Street and Broadway, the home of Black Joke Engine No. 33: the latter in particular, having the reputation of being great fighters.[1]