Find traditional instrumental music
This is the stable version, checked on 7 June 2020.
Jump to: navigation, search

Back to Del Caro's Hornpipe

DEL CARO'S HORNPIPE. AKA and see "Early One Morning," "Madame Del Caro's Hornpipe," "Many be the happy days that we may pass together." Irish, English; Hornpipe. G Major: A Major [Kershaw]. Standard tuning (fiddle). AABB. Maria del Caro was a famous dancer of the late 18th, early 19th centuries, first appearing in England at Covent Garden in 1790. She is credited in ballet circles with being one of the first to wear slippers made expressly for dancing. Del Caro (whose given name was Marie) danced in Dublin during the next two years, where Grattan Flood records: "she captivated the citizens by her dancing of the hornpipe, to which she gave her name, and which long continued a favorite." Later in the 1790's she was joined in London by her sister, also an accomplished dancer and also confusingly referred to as "Madame Del Caro." 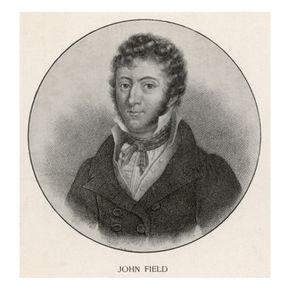 The tune was the first published composition of a very young John Field (1782-1837), an Irish pianist and composer, a pupil of Clementi, who spent much of his mature life in Russia. "Del Caro's Hornpipe", written when he was aged 15, was published by London publisher Broderip in 1797 (as "Del Caro's Hornpipe with Variations"). It subsequently appeared in a number of dance collections and instrumental tutors through the early decades of the 19th century, including Edward Riley's Flute Melodies vol. 1 (New York, 1814), Wilson's Companion to the Ball Room (London, 1816), and Cahusac's Compleat Tutor for the German Flute (London, 1798), among others.

The tune is contained in the 19th century Joseph Kershaw Manuscript. Kershaw was a fiddle player who lived in the remote area of Slackcote, Saddleworth, North West England, who compiled his manuscript from 1820 onwards, according to Jamie Knowles. There is a "Madame Del Caro's Hornpipe" in the William Mittell manuscript (1799). County Leitrim fiddler and piper Stephen Grier (c. 1824-1894) also included an untitled version in Book 3 of his c. 1883 music manuscript collection.

Back to Del Caro's Hornpipe