Find traditional instrumental music
This is the stable version, checked on 6 February 2021.
Jump to: navigation, search 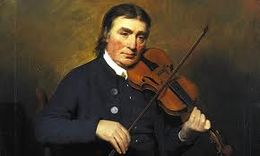 The original was composed by renowned Scottish fiddler-composer Niel Gow (1727-1807) who identified it as a lament on the occasion of the British government's prohibition of using barley to make whiskey in 1799, due to the failure of the crop in Scotland in that year (see the companion tune "Welcome Whisky Back Again," "a merry dancing tune"). It appears in his First Collection, 2nd edition (1801), and reappears in his Fifth Collection (1809), with the note "It is representative of a Highlander's sorrow on being deprived of his Favorite Beverage." Gow was known to frequently and heartily imbibe, and his reputation for drinking seemed almost as well known as his skill on the fiddle. Verses were written to Gow's tune (appearing in 1804) illustrating his distress at the event (in fact Niel himself noted in the original composition that it gave voice to "the Highlander's sorrow at being deprived of his favourite beverage"), that begin:

You've surely heard o' the famous Niel,
The man that played the fiddle weel;
I wat he was a canty chiel,
And dearly loved the whisky, O.
And aye sin' he wore tartan hose,
He dearly lo'ed the Athole brose;
And wae was he, you may suppose,
To bid 'farewell' to whisky, O.

Come, a' ye powers of music, come!
I find my heart grows unco glum;
My fiddle-strings will no play bum
To say farewell to whiskey, O.
Yet I'll tak my fiddle in my hand,
And screw the pegs up while they'll stand,
To mak a lamentation grand,
On gude auld highland whiskey, O.

Neil (1991) relates a well-known anecdote about Gow and his quick wit, and which also possibly refers to his consumption of whiskey:

It concerns his answer to a friend's query regarding the distance between Perth and Dunkeld, which Niel had just completed after an evening of fiddling, namely, that it was not the length of the road which had bothered him but its breadth.

Another anecdote is told by Drummond (Perthsire of Bygone Days) of Niel Gow and this particular composition to the effect that when Niel first heard 'James' (probably Daniel) Dow play "Farewell to Whiskey," "he pulled his bonnet over his eyes, and rushed to the door," overcome with emotion at the rendering. While colourful, the story is false (similar tales have been told of Pagannini and others), for Dow would have had to have performed it eighteen years after he had been in the grave! Gow's slow air quickly became popular, and soon was transformed into dance versions at faster tempos. Cape Breton variations are thought to be by Donald John "the Tailor" Beaton, according to Doug MacPhee (Dunlay & Greenberg); the tune is played as a slow air on Cape Breton, as it was originally written. Paul Cranford reports that some Cape Breton musicians play the tune and variations transposed down a half-step to the key of 'A' Major and tune the fiddle to AEae. Co. Kerry accordion player Johnny O'Leary played the tune as a polka, pairing it with "The Dark Girl Dressed in Blue." New England fiddlers often play the tune in G Major as a reel for contra dancing; the tune has been a standard there for many years. See also West Virginia fiddler Melvin Wine's distanced old-time variant "Walk Chalk Chicken."

In Ireland the tune was used for the second figure of the set dance "Siege of Ennis (2) (The)."