Find traditional instrumental music
This is the stable version, checked on 27 July 2021.
Jump to: navigation, search

Back to Gillie Callum 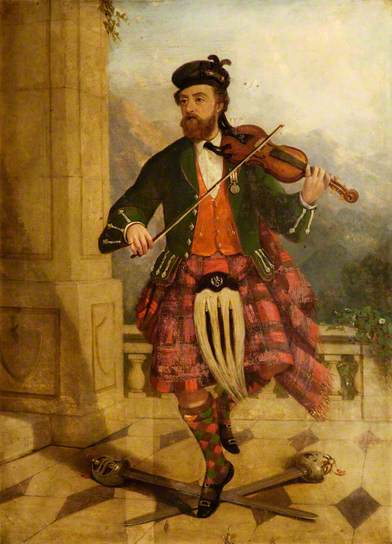 James Scott Skinner's brother, Alexander "Sandy" Skinner, performing a sword dance while accompanying himself on the fiddle, c. 1880's.
G(H)ILLIE CALLUM (The Lad Malcolm). AKA - "Gille Chaluim." AKA and see "Keelum Kallum (taa fein)," "Sword Dance (1) (The)," "Tail Toddle," "Tail Todle." AKA - "Gillie Callam da pheithein." Scottish, Strathspey (whole time). A Mixolydian. Standard tuning (fiddle). AB (Howe, Ross, Surenne): AAB (most versions): AABB (Johnson, Lowe, Milne, Skinner): ABBCDDEE (Martin): AABBCCDDEEFFGGHHIIJJ (Morison, Young): AABBCCDDEEFFGGHHIIJJKKLL (Gow/1st Collection). One of the core tunes of Scottish repertoire, sometimes published (especially in older collections) with numerous variation sets. The earliest record of the tune is in David Young's Drummond Castle Manuscript, Part 2 (1734, No. 10), in the possession of the Earl of Ancaster at Drummond Castle, sometimes called the Duke of Perth MS because of the inscription. Young also included the tune in one of his subsequent manuscript collections, The MacFarlane Manuscript, Part 2 (c. 1740, No. 101, p. 236), albeit under the title "Cuttie Spoon." John Glen (1891) finds the reel in Robert Bremner's 2nd Collection or Scots Reels or Country Dances (London, 1768, p. 108) under the title "Keelum Kallum taa fein." "Gillie Callum" retained its popularity into the next century, and J.S. Skinner, who was a dancing master as well as a celebrated violinist, taught the dance at such places as Elgin and Balmoral (where among other dances he had four children dance Gillie Callum "in a masterly style, such as has not been witnessed in this locality before")[1]. In fact, Skinner included the tune later in his collection The Scottish Violinist (1900), under the title "Sword Dance." Several sources note that this is the tune generally played as a Strathspey and Reel for the Highland Sword Dance, and the melody is today familiar in association with a Highland sword dance in which great care is taken not to displace the crossed swords on the ground during the exercise. The tune is played in distinct rhythm for the dance, being played slowly as well as quickly, which sets it apart rhythmically from other Scottish solo sword dances.

Scottish tradition has it that it was first danced by a king of the Scots, Malcolm Canmore (O'Neill says the name is an English version of the Gaelic Callum a chinn mhoir, which "signifies as 'Callum of the big head'), in celebration of his victory at the Battle of Dunsinane in the year 1054. This story goes that Malcolm slew an opponent, then in triumph placed his enemy's sword on the ground, crossing it with his own, and danced between them in triumph (Martin, 2002). Another tradition says that it is a dance of prophesy, for to touch the swords during the dance bodes ill with respect to the coming battle. O'Neill (1922) maintains that Callum "incurred the displeasure of the highlanders by marrying a Saxon princess which involved many unpopular changes. Gillie Callum, or Callum's tax-gatherer (an odious official everywhere) has been immortalized in melody, while the traditional story is well nigh forgotten." Highland piper William Gunn, in his Caledonian Repository of Music (1848) preserves the reference to "Malcolm Kenmore's Tax gatherer." However, the Gillie Callum is an old dance and there is significant lore attached to it, much of which needs to be parsed for veracity, or remain speculative.

There are several port-a-beul (mouth music) words to the tune, one of which begins:

This passage from R.C. MacLadan (1901) gives some context to the port-a-buel renditions:

Mention has been made of a 'port'. This is the substitute in case of the absence of pipes, fiddle or jew's harp--the so-called trump. These ports are single verses, generally fitted to a specific tune suitable for the dance proposed, and are sung by one of the girls present who have the necessary talent, or by one or more in succession according to their capabilities. If the young men have to be the musicians, they generally fulfil that duty by whistling. One of the most marked of these ports is the tune of the Sword Dance, 'Gille Callum'[2].

The Gille Calum dance was performed not only by men, but (at least on some occasions) by women. Elizabeth Grant of Rothiemurchus wrote of the festivities at Kinrara, the home of the Duchess of Gordon, Jane Maxwell:

We are often over at Kinrara, the Duchess having perpetual dances, either in the drawing room or the servants hall and my father returning these entertainments in the same style. A few candles lighted up bare walls, at short warnings fiddles and whisky punch were always at hand and then gentles and simples reeled away in company till the ladies thought the scene becoming more boisterous that they liked remaining in; nothing more however, a highlander never forgets his place, never loses his native inborn politeness, never presumes upon on favour.

She follows this passage with a description of the beautiful dancing of Lady Jane Montague, who not only danced the Gille Calum but Sean Triudhas/Sean Trews (1) as well.

Back to Gillie Callum