Haste to the Wedding (1)

Find traditional instrumental music
This is the stable version, checked on 25 October 2021.
Jump to: navigation, search

Back to Haste to the Wedding (1) 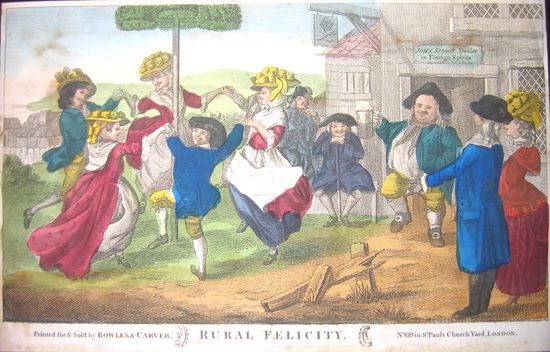 Come haste to the wedding, ye friends and ye neighbours,
The lovers their bliss can no longer delay;
Forget all your sorrows, your care, and your labours,
And let ev'ry heart beat with rapture to-day:
Ye votaries all, attend to my call,
Come revel in pleasures that never can cloy:
Come, see rural felicity,
Which love and innocence ever enjoy.

Let envy, let pride, let hate and ambition,
Still crowd to, and beat at the breast of the great;
To such wretched passions we give no admission,
But leave them laone to the wise-ones of state;
We boast of no wealth, but contentment and health,
In mirth and in friendship our moments employ.
Come see ruraly felicity, &c.

This version was sometimes known as the Manx tune and was printed by the Percy Society in 1846, but it appears as well in numerous songsters of the late 18th and 19th centuries, including The Jovial Songster (1800), The Nightingale (1802) and Charles Wilson's The Myrtle and Vine; or, Complete Vocal Library (1803). It is the basis of the Manx ballad, 'The Capture of Carrickfergusby,' written by Thurot in 1760 (Linscott, 1939). Samuel Bayard (1944, 1981) comments on the popularity of the air over the past two centuries as well as the tenacity of the main title to stick with the tune. When Chappell printed his well-known set in National English Airs (1840, I, No. 163; notes, II, 129; reprinted in JEFDSS, III, 210), he traced the tune to the year 1767, when it was used in pantomime, to a song beginning 'Come, haste to the wedding, ye friends and ye neighbors!' This version of the air, continues Bayard, is still the earliest known, and it may be that the popularity of the song occasioned the fixed quality of the title. In his 1944 work Bayard poses the question as to whether the words were included in the original pantomime as a result of its associations, or whether the later uses of the tune secured it. However, the tune's appearance under the title "Small Pin Cushion (The)" in cellist-composer James Oswald's Caledonian Pocket Companion, Book 10 (London, 1760), and the Manx "Capture of Carrickferusby" both predate the pantomime. At best, the provenance of the tune is yet to be discovered although it would appear to have Gaelic origins, and it may even be that it was Oswald's composition.

If the tune at first achieved popularity as a stage piece, it was soon after quickly disseminated, entering folk tradition. Chappell noted that the tune was "more frequently to be heard upon the chimes of country churches than any other, and usually played when a wedding is about to take place." Caoimhin Mac Aoidh (1994) reports that in County Donegal tradition a bride was 'hauled' (marched) from her house to the chapel along with her family and guests, led by a fiddler playing this tune. An early manuscript appears ance of the jig is in Lincoln fiddler William Clark's c. 1770 music copybook (No. 25). Morris dancers picked up the melody and morris dance versions have been collected from the villages of Adderbury (Oxfordshiere), Brackley (Northamptonshire), and Headington (Oxfordshire) in England's Cotswolds. The author of English Folk-Song and Dance found the melody in the repertoire of fiddler William Tilbury (who lived at Pitch Place, midway between Churt and Tilbury in Surrey), who used, in younger days, to play at village dances. Tilbury learned his repertoire from an uncle, Fiddler Hammond, who died around 1870 and who had been the village fiddler before him. The conclusion was that "Haste to the Wedding" and other country dance tune of similar type had survived in English tradition (at least in southwest Surrey) well into the second half of the 19th century. In northern Ireland "Haste" is often the first tune played in a set (along with "Leslie's Hornpipe" and "German Beau (The)") for the set dance The Three Tunes, which dates to the ceili dance revival of the 1930's. Dance instructions are printed by Keegan (2002).

In North America the piece also has a long history. "Haste" appears in late 18th century music copybooks such as those of Captain George Bush and Henry Livingston. The latter purchased the estate of Locust Grove, Poughkeepsie, New York, in 1771 at the age of 23. In 1775 he was a Major in the 3rd New York Regiment, which participated in Montgomery's invasion of Canada in a failed attempt to wrest Montreal from British control. An important land-owner in the Hudson Valley, and a member of the powerful Livingston family, Henry was also a surveyor and real estate speculator, an illustrator and map-maker, and a Justice of the Peace for Dutchess County. He was also a poet and musician, and presumably a dancer, as he was elected a Manager for the New York Assembly's dancing season of 1774–1775, along with his 3rd cousin, John Jay, later U.S. Chief Justice of Governor of New York. It was printed by Howe in his Musician's Omnibus of 1850, and in his School for the Fife in 1851. "Come Haste to the Wedding" was entered into the music copybook of American musician M.E. Eames, 1859 (p. 73). Burchenal published it under the title "Green Mountain Volunteers" along with a New England contra dance by the same name. It was recorded for the Library of Congress by musicologist/folklorist Vance Randolph from Ozark Mountain fiddlers in the early 1940's, and also was recorded by Herbert Halpert for the same institution in 1939 from the playing of a Lauderdale County, Mississippi, fiddler named Stephen B. Tucker. The title appears in a list of Maine fiddler Mellie Dunham's repertoire (the elderly Dunham was Henry Ford's champion fiddler in the late 1920's) and it was a favorite dance tune in western New York at the turn of the century (according to Bronner's source, Milo Kouf). As "Hasten to the Wedding" it was mentioned in an account of a fiddlers' convention at the Pike County Fairgrounds in the Troy Herald of July 6th, 1926. Winston Wilkinson ("Virginia Dance Tunes," Southern Folklore Quarterly, VI, 1, March, 1942) calls it "one of the best-loved tunes in Virginia." He collected it from Albermarle County fiddler James H. "Uncle Jim" Chisholm, who had played it and other tunes in the 1930's at the White House for President and Mrs. Roosevelt. Fiddlers in the Appalachians seldom knew or played 6/8 time tunes--when they did, however, this "Haste to the Wedding" was one of the most frequently played.

The following passage is from A Contribution to the History of the Huguenots of South Carolina (1887) by Samuel Dubose and Frederick Porcher. It describes a country dance in Craven County, South Carolina in the early 1800's:

Nothing can be imagined more simple or more fascinating that those Pineville balls. Bear in mind, reader, that we are discussing old Pineville as it existed prior to 1836. No love of display governed the preparations; no vain attempt to outshine a competitor in the world of fashion. Refreshments were provided of the simplest character, such only as the unusual exercise, and sitting beyond the usual hours of repose, would fairly warrant. Nothing to tempt the pampered appetite. Cards were usually provided to keep the elderly gentlemen quite, and the music was only that which the gentlemen's servants could produce. The company assembled early. No one ever though of waiting until bedtime to dress for the ball; a country-dance always commenced the entertainment. The lady who stood at the head of the dancers was entitled to call for the figure, and the old airs, Ca Ira, Moneymusk, Haste to the Wedding, and La Belle Catharine were popular and familiar in Pineville long after they had been forgotten, as dances, everywhere else.

An odd alternate title called "Trip to the Gargle (A)" appears in O'Neill's 1001 Gems (probably a corruption of "Trip to the Dargle (A)") while as "Carrickfergus (1)" it appears in Brysson's A Curious Selection of Favourite Tunes with Variations to which is appended Fifty Favourite Irish Airs (Edinburgh, 1790). The classical composer Camille Saint Saens used "Haste to the Wedding" in his opera Henry VIII, and John Powell employed a variant he collected from Mrs. John Hunter, a Virginia fiddler, in the last movement of his symphonic composition Set of Three (Wilkinson). The English novelist Thomas Hardy, himself an accordion player and fiddler, mentions "Haste to the Wedding" in Under the Greenwood Tree as one of the tunes the wedding-guests danced to after the marriage of Dick and Fancy.